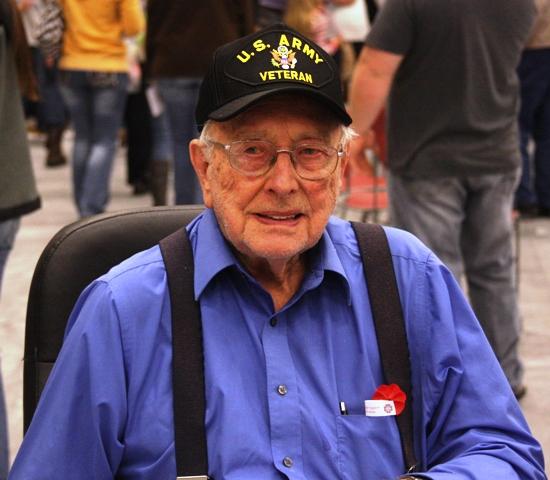 "These are the people who have given us freedom in our country," said U.S. Army veteran Doug Odle, referring to the veterans standing on the Butler County High School gynasium floor.  Mr. Odle's comments came after the veteran recognition portion of the annual community Veterans' Day program - "Butler County Salutes our Veterans" - held at the high school.  The crowd gave those in attendance a rousing standing ovation in appreciation for their service.
To start the program, the Parading of the Colors was conducted by the Bulter County High School N.J.R.O.T.C Color Guard under the leadership of Chief Jim Melton and Major Robert Redmond.

With students in attendance from all of the district's schools (grades 4-12), Butler County Schools' Superintendent Scott Howard kicked off the speaking part of the program by welcoming those in attendance and speaking briefly about the importance of honoring veterans.
"This is the single most important event we have here," said Howard, who thanked event coordinator Linda Tyree for her work on the project.
Mr. Howard provided a short history of the day with its origins from World War I as Armistice Day, how it became an official holiday in 1938, and how in 1954 it was changed to Veterans Day in an effort to honor all veterans from all wars.  His words then took on a more personal note as he spoke about his late father, Bobby Howard, who was a veteran.
"This day is special to me because my dad was a veteran from the Vietnam War," said Howard.  "He enjoyed coming to these events and was a Veteran of the Year," added Howard.
Mr. Howard concluded his comments by expressing his gratitude for all veterans.
"On behalf of the superintendent's office and the Board of Education, I want to thank all veterans here today and their families for their sacrifice.  Without them, we couldn't be here today," said Howard.

T.J. Howard gave the invocation.  He is the grandson of Mr. Hugh Howard, who served during World War II.  T.J. is a graduate of Butler County High School and he served in the U.S. Navy aboard the U.S.S. KISKA during Desert Storm/Desert Shield.  He is an ordained minister from Belmont General Baptist Church.

The B.C.H.S. Band (Director Jason Ausbrooks) and the B.C.H.S. & B.C.M.S. Choirs (Director Travis Lowe) performed several patriotic songs throughout the program.  Jennifer Scott assisted the BCMS Choir with an American Sign Language interpretation.  Among the songs performed were "The Star-Spangled Banner," "My Old Kentucky Home," "The Battle Hymn of the Republic", and "My Country Tis of Thee."

Next on the agenda was the recognition of Buddy Poppy Good Citizen Awards (more on that program can be found at http://www.vfw.org/Community/Buddy-Poppy/.

The keynot speaker was Sergeant Jim "Sarge" Domerese, a U.S. Army veteran.  A Flint, Michigan native who now lives in Bowling Green, Sgt. Domerese served a tour of duty in Vietnam (1969-70) with the 173rd Airborne Division.  He later served in Desert Storm and Iraqi Freedom.  He served in the US Army for 26 ½ years at the Rank of Sergeant First Class.  Although Sgt. Domerese now lives in Bowling Green, he was an active member of the Hawesville, Kentucky community, serving as city councilman, mayor, and owning a small business there for twelve years.  He has served as a Drill Instructor and Calvary Scout Instructor at Fort Knox, Kentucky, and received the “Warrior Citizen” award for service while in the Army Reserves.  He currently serves on the Board of Directors for the Salvation Army in Bowling Green, Kentucky and is a huge supporter of Western Kentucky University.  He has taught Bible Study and worked with the Kentucky Prison Ministry through Hillvue Heights Church.  He has been married to his wife, Linda, for 43 years, and they have two children and five grandchildren.
"I am really and truly honored to be here today," said Domerese, who ceremonially inducted attendees into the U.S. Army and provided basic instrutions on how to stand at attention.  Sgt. Domerese recounted his experiences while serving in Vietnam.  This year marks the 50th anniversary of the start of the Vietnam War.

Following the B.C.H.S. Band's "Salute to America's Finest," which was a compilation of U.S. Military service songs, Mr. Bryant McClellan, music teacher at Morgantown Elementary played "Taps" after a moment of silence to remember veterans who have died.

"I’m always so proud of our amazing students and I really appreciate the way Butler County teachers model the importance of showing respect to our veterans," said Coordinator Linda Tyree.  "The most powerful part for me is when Doug (Odle) calls each name and seeing each veteran stand.  I’m sure the way our students responded to that (with a standing ovation) made each veteran feel honored and appreciated," added Tyree.

The colors were then retired by the Butler County High School N.J.R.O.T.C Color Guard, which marked the end of the program.  Veterans and their guests were also invited to a reception in the B.C.H.S. Library provided by the B.C.H.S. F.C.C.L.A.