Cockfighting in the crosshairs at Morgantown debate 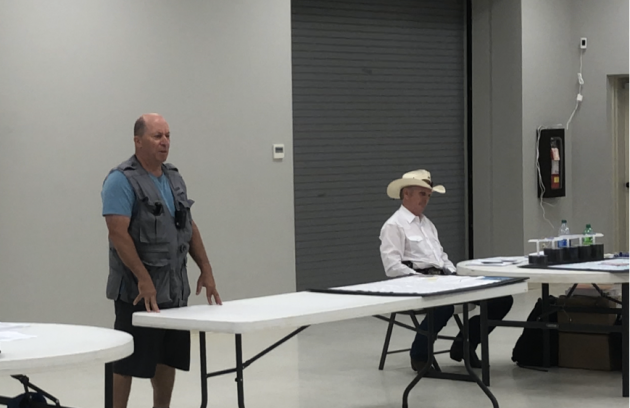 On Sunday, September 6, approximately 25-30 individuals gathered at the Eva J. Hawes Building in Morgantown to listen to a debate between two very well-own activists in the world of cockfighting

Steve Hindi is an American animal-rights activist and businessman. He is the founder and president of the animal rights organization Showing Animals Respect and Kindness (SHARK).

B.L. Cozard Jr. is a gamecock farmer and participates in cockfighting. He is actively involved in legislation affecting his fellow Americans and animal ownership.

When asked why they came to Morgantown, Hindi said he picked Butler County because, like several other Kentucky counties, "the sherriff is corrupt." Hindi said he has attended two cockfights in different locations in Butler County and videoed the events. He stated he shared the videos with local law enforcement and nothing was done. The videos can be viewed on the SHARK site.

According to Sheriff Scottie Ward, the events were under investigation by the Kentucky State Police.

According to Morgantown Mayor Billy Phelps, the building was rented for four hours for a Constitutional Debate of Poultry Farmers and cockfighting was not mentioned.

Opponents of cockfighting believe one reason Kentucky has a large number of producers and fighting arenas is that it is one of few places where cockfighting is only a misdemeanor under state law. It is a felony in most states.

Under the law, animal cruelty in the first-degree (a class D felony) occurs when a person causes four-legged animals to fight for pleasure or profit. Exclusions under this section include, among others, the killing of animals when hunting, fishing, or trapping; as an incident to the processing as food or for other commercial purposes; or for veterinary, agricultural, spaying, or neutering, or cosmetic purposes.

Cozard's point is that our God-given rights and Constitutional rights are being violated, and people are being forced to Communism and Pagan practices of earth, animal, fish, and fowl worship.

He encouraged cock farmers and fighters to stand up for their constitutional rights.

"God gave man dominion over the earth, animals, fish, and fowl; our Constitution is written to ensure each man is equal in these God-given rights, to advocate as you do that the God-given rights of the gamecock farmer can be taken away over your personal desire to protect chickens amounts to paganism and animal worship as you have personally chosen to put animals (chickens) above the lives of the gamecock farmers," said Cozard.

The event was well organized, peaceful, and Hindi and Cozard were given equal opportunities to express their beliefs.