"Closing the post office will affect the community," Shane Wells 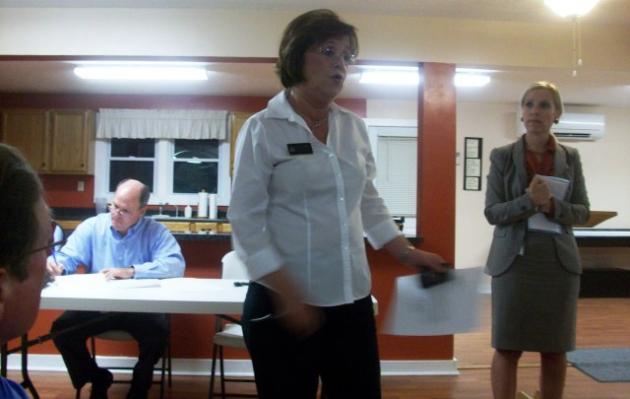 Alisa Zanetti-marketing manager for U.S. Postal Service in Kentucky and Chris Carroll-Western Kentucky manager over the 422 area code were the ones fielding questions this evening.  Zanetti, from Louisville, worked in the post office 19 years.  She paid her way through school by working in the postal service.  She explained that 80% of rural postal workers are women.  In the last fiscal year the U.S. Postal Service lost $10 billion.  The electronic industry has taken a large portion of post office business.  Since 2006, mail volume has decreased nationwide by 43.1 billion pieces. Five years ago, Home Depot, Macy’s and JC Penny sent coupons via mail.  Now, the electronic industry has taken control of that medium.

Ms. Zanetti says that “fundraisers, including selling magazines, support the postal service.   She adds “there are 800 post offices in the state not making revenue.  That has not happened in 15 years.  In 2007, revenue in Rochester was $23,465. Revenue has decreased greatly in 2010.

First class mail volume has seen a 70% decline in the past four years.  Retail revenue is down 14%.  Chris Carroll-Western Kentucky manager over area code 422-said in response to a price question that” we are not allowed to set our own prices. Priority mail is set at $4.95 with no surcharges”.

In discussing distribution centers, it was said that eighteen workers lost their positions in Louisville.  Lexington, Paducah, Evansville, Bowling Green, and Louisville will be the only distribution centers remaining.  800 jobs will be affected.  As it is, mailing equipment is only utilized 4-6 hours a day.

Carrier routes nationwide are adjusted every 3-4 months.  As stated above, there is a 70% decreased work load.  “Under-used facilities are being sold”, says Miss Zanetti.  She added, “Already a post office in downtown Chicago has been sold, as well as other federal buildings”.

One of the possibilities brought up if the office were closed was a village post office.  This is a row of boxes, such as in larger cities.  Also, the postal service can partner with local businesses and can be blended in with their business.

Questionnaires were sent for a post office study, which are available upon request to pick up and fill out at the Rochester Post Office. There is an appeals process with the postal rate commission if the post office is closed.    The postal service is part of the Executive Branch of our federal government.

Mr. Carroll explained that “When a post-master retires, a post office automatically goes into a discontinuance study.  Every amount of cost saving is looked at when considering closing an office”.    In 2006, the post office’s growth peak was reached. It has been on the decline ever since.

Kentucky State Representative C.B. Embry Jr. was next to speak.  He said “My priority was to be here tonight. Because of income and distance, Rochester is an important, historic, and vibrant community with lots of activities”.

Rochester Mayor Horace Hammers asked, in response to other close by post offices that are not closing, voiced opinion that it’s apparently fine to leave post offices open that are just down the road from each other, but close the one where the next closest is in Morgantown?

Sandy Simpson, U.S. Representative Ed Whitfield’s field rep, said “(Mr. Whitfield) sent me here to stand with you (the Rochester community) and beside you.  Let’s all try to work together.  We want you to express how much this means to people here.  Congress didn’t mandate closing these post offices. The postmaster general did”.  “Once this process goes through, there will be 3 or 4 more up for closing”.

The post office is a $1 trillion industry and has the biggest percentage of GDP in the United States.

Finally, Shane Wells thanked the officials for attending and said, “Closing the post office will affect the community, I hope you realize.  One-stop shopping isn’t going to work in this small a town.  If you do close 3700 post offices it will save .3 or 1%.  That’s not going to solve any problems.  Not everyone in the area has internet access, or has limited cell phone service.  I hope you let folks in Washington know that closing the post office will have an adverse effect on this community”.

After the meeting adjourned, I had the opportunity to speak personally with Miss Zanetti.  She said “this is the most attended, most represented meeting of all I’ve been part of.  This is the only state with as many areas well represented.  The average attendance for these meetings is 60.  I’ve had meetings every year.  Never once has there been as much attendance as this year”.