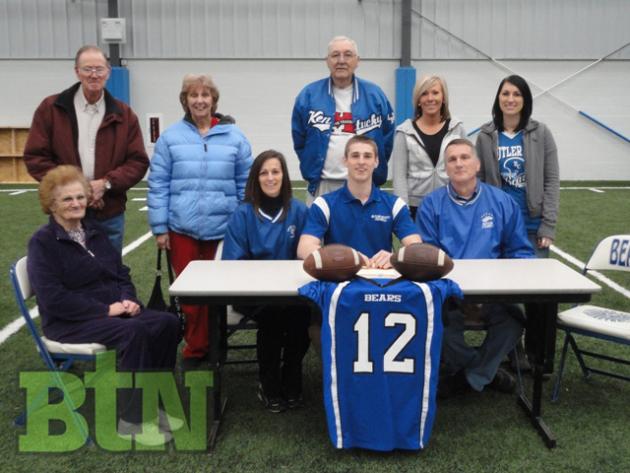 Clay Embry, a standout senior running back and wideout for the Butler County High School Bears, has signed his national letter-of-intent to play his college football at Campbellsville University. Embry helped lead the Bears to an 8-4 record in 2011. For the season he had 38 catches for 640 yards and nine touchdowns. Embry also had 36 rushes for 473 yards and eight touchdowns, and four return touchdowns. Clay is the son of Todd and Angie Embry of Morgantown.

To get the signing ceremony started, BCHS Head Football Coach Ryan Emmick addressed the crowd gathered, including members of the football team, saying that "Only 10% of high school football players get the opportunity to go on to play in the collegiate ranks. Clay now has that opportunity. It came through hard work, discipline, character, and pushing through." He added, "Clay has personified the willingness it takes to fight through when times were hard. He has the advantages of God-given ability, but ability only takes you so far. You have to be willing to take it and go somewhere. Today is the day that we are going to celebrate Clay's opportunity."

During the ceremony, Embry said, "I would like to thank God for the life that he has given me and for the talent that he has given me. I want to thank my parents for all of the support and guidance that they have given me throughout this process and throughout my whole life." Embry went on to thank his coaching staff, teammates, and the community for all the support they have given to Butler County High School athletics over the years.

He also thanked Campbellsville for the opportunity that they have given him to continue his playing career. Embry said he had waited so long to make his decision because he wanted to see what offers he had, and wanted to make the right choice. He said that Campbellsville came up with an offer which combined scholarships for football and academics that pay the majority of his tuition and expenses.

BC Defensive Backs Coach Brian Bivens said that when he first moved to Butler County, everyone kept talking about Clay Embry. Bivens said, "After our first practice, I went to Coach Emmick and said, 'Coach, we have a college football player on our hands.'" Bivens added that Clay has "tremendous God-given ability. He's one of those rare occasions where you have a kid who is really talented but who is still willing to out-work everybody on the field. That's why he's been given this opportunity."

Emmick said that this signing is huge for athletics in the county. He said, "A player, such as Clay, signing with a college brings some visibility to our program. I think we're going to have young men and young women that are in middle and elementary school that look at Clay and say 'Hey, I can go on and do something beyond high school athletics.'" Emmick added that he plans to attend every single game at Campbellsville that he can.

The entire Embry family is excited about Clay's opportunity to play at the next level. "We're very proud of him," said his father Todd, "We're happy that he has found a place close to home so we can go and watch him, and enjoy him play. He's excited to be there and they're excited to have him."

At CU, Clay will concentrate on playing wide receiver. Embry said he is excited about the prospects of being just a wideout. "I think that’s what I’ll be specializing in," said Embry of his prospects at WR. Embry said he chose the school because of it’s close proximity to Butler County and because he liked the feel of the small campus. Asked if playing time had been promised for his freshman year, Embry said, "I wasn’t promised anything, but they said if I could compete I would definitely be a consideration." Embry said he will enroll at the school in August and join the team in late summer to begin practice for the 2012 season.