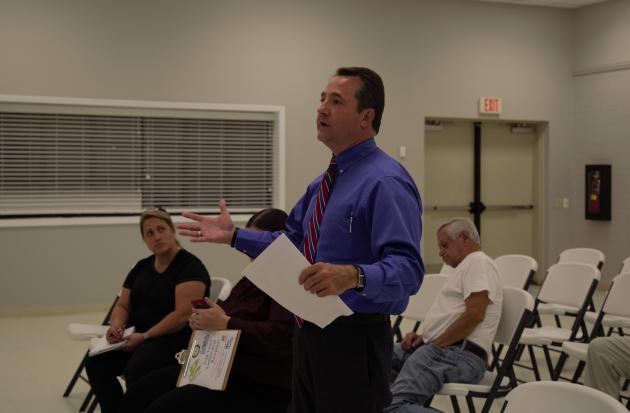 The Morgantown City Council met in regular session on Thursday, Oct. 10 at the Eva J. Hawes Building. All members were in attendance except for Russell Givens.

Hunt explained that the trail is the Green River with Morgantown sitting right in the center. According to research, Hunt shared the official definition of a trail town and described it as, "A destination along a long-distance trail or adjacent trail to an extensive trail system (hiking, water, rail trail, etc.) where people can venture the paths to explore scenery and heritage, and allows residents to access the area and local businesses and goods and services and bring people together.”

“I believe whole heartedly that Morgantown does this as it is more like home every day,” Hunt said.

Trail town meetings are held on the fourth Monday night of every month at the Eve J. Hawes building at 6:30 p.m.

A reception will take place on Thursday, Oct. 17 at 6 p.m. at the Butler County Arts Guild, where the trail town will be presented with the official certification. Hunt welcomes everyone to attend the event and celebrate the newly claimed trail town.

Mayor added that this is a big accomplishment as there are only a handful of areas throughout the state that have received the certification.

Signage will also now be presented on the parkway designating Morgantown as a trail town. City Administrator Jerrod Barks said that there may be a delay in the signage due to it now being required to receive federal approval because of the parkway now being an interstate.

The construction at City Hall is nearing a finish with work aiming to be complete in December. The city plans to have their first meeting at the newly remodeled City Hall building on Friday, December 6 with a proclamation and closing of a 20-year time capsule event following the meeting. The time capsule will be open for anyone to bring letters to be put away for a 20-year time period. It will be on a permanent display in City Hall for the public to view. Schools are being contacted to request students to write letters to themselves to open in the future and the Mayor encourages everyone to do the same.

President and CEO of Bowling Green Area Chamber of Commerce, Ron Bunch, spoke on the Chamber’s progress of meeting with all ‘targeted businesses,’ meaning businesses in Morgantown that do more than half of their business outside of the state and added the Chamber will be restarting their rounds of meeting with these businesses again soon.

Bunch said the Chamber is working to tie down a few expansion projects by the end of the year that are in the works. He also wanted to make the city aware of the Small Business Development Center (SBDC) and spoke on how the recent lack of funding for the center in this region of the state has led to a center in this region no longer currently existing. Bunch said the Chamber is working directly with the state director to develop a new model for Kentucky and revive the cash match needed for it. Bunch hopes that Morgantown will be among the cities to invest with in the SBDC in order to and allow them to receive the benefits of the center with a goal to sign a contract with the state in November. When signed, they will then be looking for a new employee that is externally based in working with the community and helping future entrepreneurs.

Mayor Phelps wanted it to be clear that the SBDC is a separate entity that will simply be a sector of the chamber and as Bunch described, “A tool in our toolbox for economic development.”

“Or goal is to help create as many jobs as possible in as many sectors that way the economy grows,” said Bunch.

“There is no way we could do what we do without you all,” Mayor Phelps said.

Housing Authority: The Housing Authority did not meet in September due to the executive director attending the Kentucky Housing Association Self Insurance Conference. The agency received notice that their Capital Fund has been increased from $385,992 to $386,927 for the 2020 Capital Improvement. Gossey also wanted to remind the public that veterans receive first priority in the housing district if there are any currently searching for housing.

Maintenance: Maintenance has been doing fall cleanup including mowing, weed eating and bush hogging to prepare for the season. No other updates were given.

City Administrator: Some of the grants that were received by the city have expired, meaning the paperwork will have to be resubmitted, however Mayor Billy Phelps assured the public that these grants are still awarded to the city. Hebrews Coffee has become the first recipient of the Morgantown City Entrepreneurship Grant and will receive their first check this month. Recipients of the Façade grant include Hebrews Coffee and Hocker Insurance who received signs for their businesses Spoke to a committee in Frankfort about the Land and Conservation Grant that was applied for by the city and will hear word back later in October. The city was given a three-month extension on the Generator grant for City Hall due to it also being expired. Barks also spoke on the upcoming creation of a Morgantown City Magazine which work has already began on and will be published in the upcoming months.

Fire Department: The following report was given by Ronald Givens for the previous month:

Police: The following report was given by Chief Giles Taylor for the previous month:

All department training has been completed for the year except for fall firearm training. Policy revisions have been completed to reflect the new statute changes. The Savior initiative has been added as a new policy under juvenile operations section 18.13 and will go into effect on Oct. 15. More information on this will be presented soon.