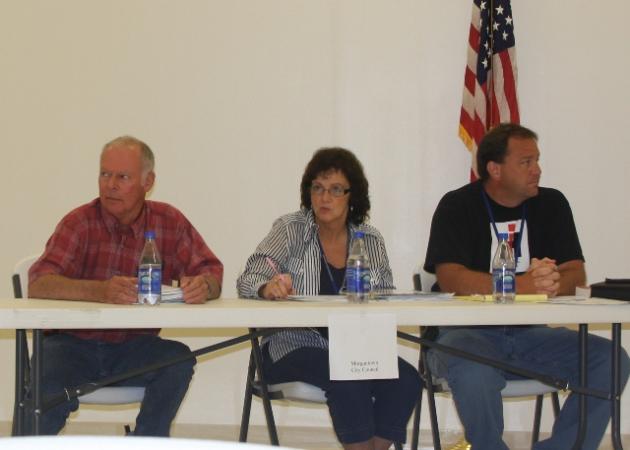 In a lengthy meeting last night, the Morgantown City Council modified their current lease with Pizza Zone, authorized formation of the Rochester Regional Water Commission, and approved a mural project in Morgantown.

Dale Willis of Pizza Zone presented the Council with an estimate he had obtained for insurance on the building he is leasing from the city based on $440,000 on the building and $1,000,000 for liability.  Mayor Linda Keown and Council member Terrell House told Willis that the city has to get their insurance as one package for all city property but that Willis' estimate was a help to them.  Willis asked if the insurance was the last issue before the city decided on his proposed changes to the lease; Mayor Keown said yes.  After Council member Rick Scott moved to accept Willis' lease modification, Council member Russell Givens said that Willis should live with the terms of the current contract.  Givens stated that "the city shouldn't be in this business, period" although the city should insure the building and keep it to state code.  House countered that the city should help Pizza Zone the same as it did Kentucky Copper.  Willis was asked if he wanted to stay in the building, and he replied that he wanted to do what's best for him right now, that "this is business" and asked the Council "You don't want another Charley Biggs, do you?"  The Council approved modifying the remaining 2 years on its contract with Pizza Zone on a 5-1 vote, with Givens voting no.

Josh and Landon Hampton of the Hampton Company presented the Council with a formal proposal on the mural project and the redesign of the city's website.  Regarding the mural project, Josh Hampton told the Council that Andie Rudloff of SKyPAC could design and paint a mural on a city building that would cost between $1,750 and $2,750, and she could paint as long as the temperature was 45 degrees or above, so the painting would not necessarily have to wait until spring.  Josh asked where the Council would like to have the mural, and Council members Edra Dean Hampton and Russell Givens preferred the auto parts building across from the courthouse.  Josh Hampton suggested a committee to formulate what kind of mural is wanted, and the artist would execute that mural within her style.  The Council unanimously approved the mural project with Rudloff as the artist.

On the city website project, Josh Hampton proposed Yellowberri to do the website design.  Council member-elect Allen Meredith asked if such a website could be designed to allow utility and tax payments; Josh Hampton replied yes at an additional cost.  The consensus of the Council was to do some research and take the website proposal up at the next meeting; Landon and Josh Hampton said that even if the Hampton Company was not used, the redesign needs to be done.  House said of both the website and mural projects, "This is a big opportunity."

The Council approved the second reading of the ordinance that give city authority to form the Rochester Regional Water Commission.  Similar approval will be needed from the Fiscal Courts of Butler County and Ohio County.

The Council heard from Chris Hughson who explained proposed ordinances closing three alleyways in the block that includes the Morgantown Mission and Dick Dye's office.  Hughson said the alleys were originally meant for cleaning behind buildings when coal was the primary fuel; he also said the alleys had not been used in years.  The Council passed the first reading of both ordinances closing the three alleyways.

Mayor Keown discussed Greenville's efforts to renovate their downtown over the last five years.  She suggested that Morgantown officials meet with the Greenville mayor since Greenville is comparable to Morgantown and successfully dealt with many of the same downtown issues.  Council member-elect Dionne Merritt asked if Greenville had condemned buildings in their downtown as Morgantown does; Keown said yes.

In other business, the Council granted permission to the Red Cross to use the Eva J. Hawes Ag Expo & Community Building in times of community emergency and approved American Legal to update the annual code book of ordinances.