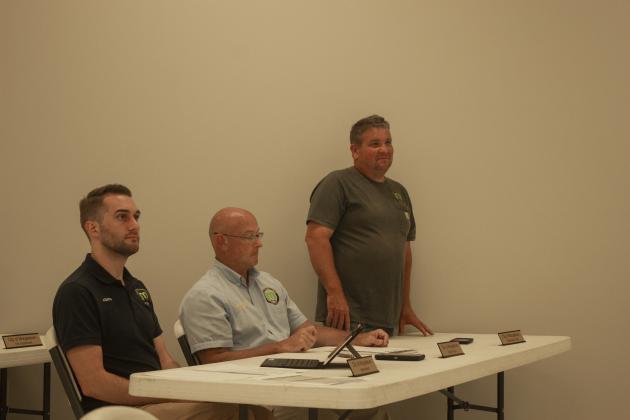 Morgantown City Council met on Thursday, July 11 at the Eva J. Hawes Building. All council members were initially present, however Councilman Dustin Embry had to leave for work-related purposes.

The following reports were given:

A hearing was held concerning a request to change the zoning of a road from residential to commercial. The plaintiff did not attend the hearing and no action was taken.

The commission approved the addition of a carport on North Main Street.

Bryan Locke gave thanks to City Administrator Jarrod Banks for their new process of becoming notified immediately through e-mail when a permit is requested at city hall.

The committee explained that they are expecting action after the new zoning map that was submitted to the city.

Updated reporting was given on the Capital Funds Contracts including replacement of heating and cooling units and the replacement of playground equipment at Kent Manor.

A discussion took place regarding the delay of the paving of the parking area at the Boys & Girls Club. James Dossey stated that the contractor has delayed the project due to the interference of weather. He said that the company has been rather uncooperative and is causing hardship to the club. Dossey said they are working to get a schedule for the project.

A resident and recent graduate of Butler County High School received a $3,000 scholarship from the Housing Authority.

A representative was not present, however a brief report was shared with Mayor Billy Phelps before the meeting on the progress of the gas lines being hindered due to weather.

The Mogo Shuttle representative was not present, but also shared information with the board members beforehand. Jarrod Barks shared that the average daily numbers were approximately 37. Mayor Phelps reported that within the past month, 547 total runs have been made. Phelps stated that their numbers have gone up by about 60 people from the previous month.

51 cases have opened  in city limits since February of this year. 23 of those are still open and 28 have been closed.

5 citations have been issued resulting in fines

1 indoor furniture being used outside

Harold Deweese said that maintenance is working to get the park back in order from the festival. Mayor Phelps praised Deweese and his employees and thanked them for their hard work during the Catfish Festival. Chairman Sterling White also commented saying that the grass and sidewalks in town are looking nice due to maintenance and their efforts to spray for weeds.

Chief Giles Taylor reported that the number of calls for service was down from last month and shows the first decline that the department has seen in months.

He also shared that they are 35 percent complete for the required inservice training for the year.

No calls were made inside the park during the Catfish Festival. Taylor said this marks the second year of no calls.

The city’s budget year has just been completed. Jarrod Barks reported on the finances:

General Fund: The city spent more than they took in for tax revenue. Barks said this was to be expected due to the stockpiling of money in the previous years.

With the given expenditures, the end of the year General Fund was expected to be at $648,000. The total in the city’s account is currently at over $1.5 Million.

“We did very well financially this year, just as we have in the last few years,” Barks said.

Mayor Phelps shared that he and Judge-Executive Tim Flener met with Real Alloy over the weekend. The company invited them to tour the facility to learn about the company and their process and to share information about the precautions that are taken. Phelps said that it was a very informative meeting.

“They wanted us to see how they operate and what goes on and it was a good meeting,” Phelps said.

Phelps also spoke on the progress of the city pool. All work has been complete except for the installment of the back-garage doors which is currently being done. Phelps said they originally wanted to call an opening ceremony at the pool prior to the meeting, however he wanted to wait until all work was officially complete.

The city met with workers of the city hall project and were ensured that the work would be complete on time.

Phelps spoke on the success of the 39th annual Catfish Festival.

“The festival, even though it is a Chamber event and a county fair, would not happen if it wasn’t for the dedication of the city of Morgantown,” Phelps said.

Under new businesses, the second amendment of the 2018-2019 budget was made. Phelps explained that the reason for this was due to the reequipping of the fire department exceeding the budget as well as an increase in budget due to the blacktopping of the streets. The new budget was approved.

A businesses incentive program has been created by the city and was discussed. A municipal order was put into place to create a Committee for Business Incentives. The program will assist in providing façade grants and business accelerator funds for local, small businesses within the city of Morgantown. Mayor Phelps recommended three people to be appointed members of the committee: Kathern Jennings, Greg Drake and Dwayne McKinney. These are also the same members that currently make up the county board. Phelps recommended that the city stick with the same people. The City Council approved the three members.

The committee will ultimately operate the same as the county, however Phelps said there may be some changes and stipulations made. Barks said the main difference will be financially. He stated that while the county will still be making the decisions, the city of Morgantown will now have full control over their money as finances will now be dealt with in-house.