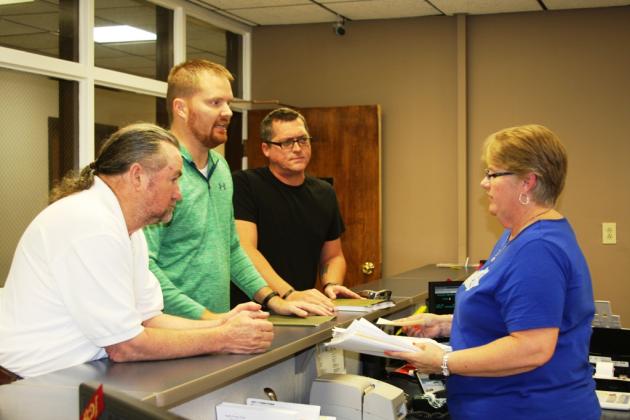 A local option petition launched this summer that would put the question of legal alcohol sales to local voters was officially submitted to the office of the Butler County Clerk earlier this afternoon for verification.  According to organizers with the group Citizens for a Better Butler County, over 2,000 signatures were gathered from local residents asking that the measure be considered by voters at a special election.  A total of 1,038 signatures are required to put the question on the ballot based on figures from the 2014 General Election.  Once received, the county clerk's office will begin the process of verifying the names on the petition to make sure they are qualified voters who live in the designated area.  The petition was circulated countywide and reads as follows:

‘Are you in favor of the sale of alcoholic beverages in Butler County, KY?’

According to a press release from Citizens for a Better Butler County, local residents have not been given the opportunity to vote on legal alcohol sales since 1942.

"Not since 1942 have our residents been given the choice to keep tax dollars in our local economy when purchasing beer, wine and spirits," stated petition organizers.  "Several communities surrounding our county have already begun to reap the benefits, both economically and culturally, that come with the legal sale and taxation of alcohol. We believe in order to maintain viability during these fiscally challenging times, our citizens deserve the right to choose what we deem necessary to help stabilize the local economy.

Josh Hampton, Bryan Locke and Cody Donaldson, county residents and spokesmen for the group, said they look forward to answering any questions voters may present and to the possibility of working with local lawmakers to set a high standard of alcohol regulation and control.

“I'm encouraged by the fact that over thirty community leaders, business people, elected officials, law enforcement, and even religious leaders of our community came together to make this petition a resounding success.  More than double the amount of legally registered voters needed signed the petition. We'll lean on them for their support -- and then some-- when it comes time for the election,” said Locke. “This is not about alcohol coming to Butler County.  Alcohol is already here.  It has been purchased elsewhere and brought here for legal consumption for years.  The sale of alcohol is legal in 97% of the counties in the United States.  It's time that Butler County takes the legal step forward out of the less than 3% minority and reap the same rewards those communities have long benefited from financially, economically, and socially.  We shall regulate its consumption, tax it, and grow our local economy as our neighboring communities including Russellville, Central City, Glasgow, Franklin, and Leitchfield have," added Locke.

Donaldson echoed Locke’s comments and expressed his excitement to see the measure come to a vote.

“I'm looking forward to exercising my civic responsibility with an opportunity to vote "YES" for less government restrictions and increased freedom in Butler County,” said Donaldson.  “We deserve to have the same opportunities as everyone else.”

Hampton said his efforts in this movement are driven by his desire to have a better Butler County for his family and their future in the community.

“I’m looking to keep my family and businesses located in or around this community, but without some sort of positive shift economically and socially, it will become increasingly difficult to make that happen,” said Hampton. “Certainly, there are people who abuse alcohol. There are gluttons in many situations but we can’t hold the faults of a few against everyone. It’s impossible to be fiscally conservative and against the taxation of this legal product. We’ve had verbal commitments from several area restaurateurs, stating they would migrate to Butler County given that this movement is a success.”

After the petition has been verified, it will be given to the office of the county judge-executive, who will then set the date for the special election.  The group anticipates an early January 2016 election date. The group asked for the election to be held on January 19, 2016.

For more information about Citizens for a Better Butler County, citizens may use the contacts below:

- On Facebook at - www.facebook.com/morgantownky
- Josh Hampton at 270-792-5761 with any further questions or concerns.