Cheryl Hughes: The One That Didn't Get Away 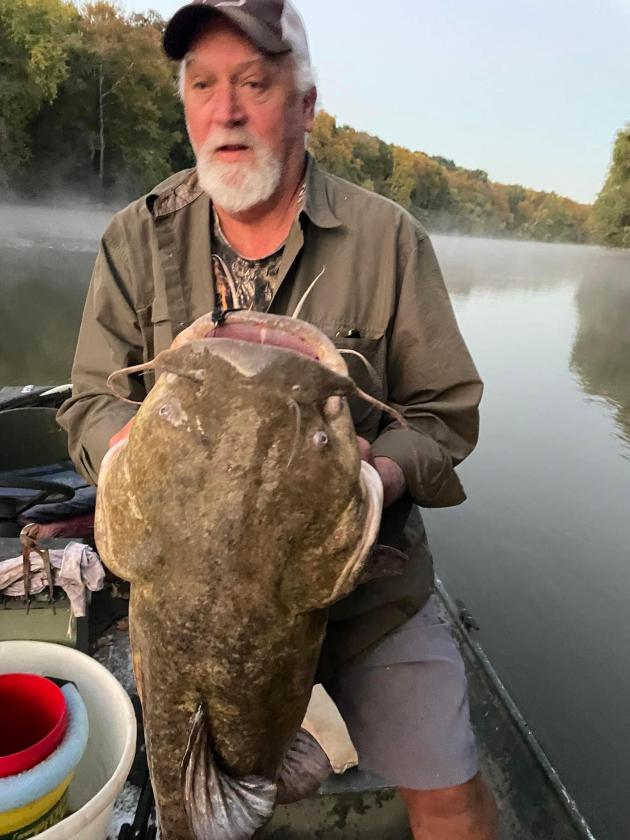 I believe I’ve told you before that the worst night of my life was spent on the banks of the Warrior River in Alabama, watching and waiting as Garey and my father-in-law ran a trotline.  They made an event of the process; cooking eggs over an open fire, making coffee in a Crisco can—which is okay if you don’t mind straining grounds through your teeth—and sleeping on plastic on the always-damp riverbank. “I was promised there would be fun,” I said to myself, as I huddled close to the fire and sulked.

Because of this experience, when I saw the picture on fb of Greg Hampton’s and Coz (Charles) Costello’s huge Flathead Catfish, caught on a trotline, I thought, “Well, at least they came away with something for their misery.”  I told Greg my trotline story, then offered my condolences for all the pain and suffering he and Coz had to have experienced to get the big fish. 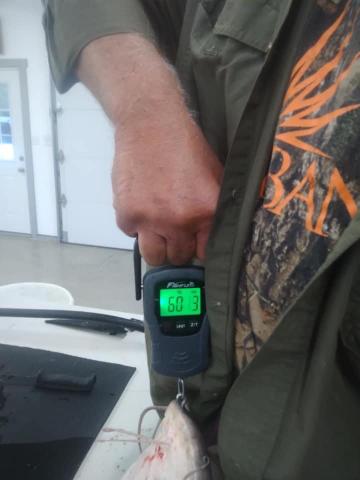 “Cheryl,” Greg said, “It takes us an hour from start to finish to bait the line in the evening and get back home, then about forty minutes to run it the next morning.”

Wait, an hour and forty minutes, with no coffee grounds or plastic involved!  I’ve been fishing with the wrong people!

My father loved to fish and would run trotlines with his friends, but we were never allowed to tag along.  (I guess, it depends on whether he and his friends were of the Alabama or Butler County school of trot-lining as to whether we were being punished or rewarded.)  Greg, on the other hand, was allowed to tag along with his dad, Bobby Hampton, and Bobby’s friends, Johnny Moore and Darrell Johnson.  Greg learned the skill by watching.

Greg and Coz have fished together since they were kids, dropping hooks at the ends of cane poles into the Little Muddy.  The two have been setting out evenings on the Green River in a flat-bottom boat with a 40 HP Tracker for the past seven or eight years.  They’re usually finished baiting by ten to fifteen minutes before dark and are back on the river at daylight.  They bait anywhere from 40 to 47 Eagle Claw hooks—keeping within the “no more than 50 single or multi-barbed hooks,” specified by Kentucky Fish and Wildlife—and they weight the line with bricks in order to keep the line at least 3 feet below the surface of the water—another Fish and Wildlife stipulation (fw.ky.gov).  They bait with Bluegill.  Yeah, I know.  I told Greg that was a sorry waste of Bluegill.

I always figured the “trot” in trotline was just a misspelling of the word “trout,” as in the fish by that name.  Turns out, I was way off base.  Here’s what happened.  “Back in the early days of the fishing industry, fishermen used baited lines that they ran along the bank shoreline.  Trot was the word used to describe their method, because horses were used to pull the lines up and down the banks of a channel or river.  The word, trot, is an old Dutch word, trodden, which means to follow along” (scttx.com).

When Greg and Coz run their trotline, they are hoping to catch either Flathead or Mississippi Blue catfish, and they do catch both, along with the occasional Spoonbill.  If they hook a Channel Cat, they usually turn it loose or give it to a friend for their pond.  At the beginning of each fishing season, they have the same mantra: “If we catch a sixty-pound Flathead, be it April or October, we’re done for the year.”  The huge Flathead in the picture that accompanies this article weighed in at 60.3 pounds.  It was caught Friday night, October 14th, the last run of the year.  The irony of that happening wasn’t lost on them.

I asked Greg if he and Coz drove the fish around in the bed of his truck and showed it to all their friends, like a lot of guys do with the deer they kill in the fall.  The answer was “no.”  They fileted it out shortly after it was caught; however, Greg did keep the jaw as a trophy.

I wonder how many future generations will run trotlines.  Neither Greg’s nor Coz’s sons are interested in the activity that keeps their fathers returning to the river.  I really hope there will be those who keep the tradition alive.  Where would we be without a good fish tale?