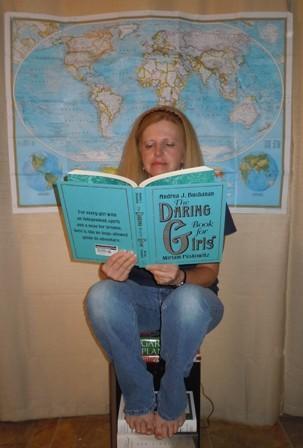 “There’s water in the gas,” I said to Garey, as I backed the golf cart out of his shop.

“There can’t be water in the gas,” Garey said, “I just put brand new premium gas in it.”

“Well, that’s what I think it is,” I said, as I climbed out of the now-stalled golf cart.

The golf cart and why it wasn’t running right had been the topic of conversation at the Hughes house for going on three weeks—three weeks since one of our granddaughter’s friend talked her into taking it for a spin down into the back pasture and across a gully, where it became stuck and had to be pulled out.

“Maybe, when the kids bottomed it out, it pinched the gas line,” Garey theorized.

“I think there’s water in the gas,” I repeated.

“There isn’t water in the gas,” Garey reiterated.

The gas line wasn’t pinched, but Garey found a few cracks in a vacuum line that he covered in black tape.  “This should fix it,” Garey said.

The next day, on the way home from Bowling Green, we stopped in at Kenny’s Karts in Hadley.  I waited in the car, while Garey talked to Kenny.  “Kenny said I could get a vacuum line at Big Country Power Sports in Bowling Green,” Garey said, “I’ll go by and pick it up on my way home from the doctor on Wednesday.”

“There’s water in the gas,” I thought, but didn’t say.

On Wednesday, Garey called me from Big Country Power Sports to tell me he was on his way to Smiths Grove to pick up a fuel plump for the golf cart.  “The guys here said that’s what it sounds like to them,” Garey said.

“It’s not,” I said, “It’s getting water.”  I walked back up to the house before he could tell me there wasn’t water in the gas.

You might ask why I was so sure there was water in the gas.  I’ll tell you why.   I’m 64 years old, I live on a farm, and as such, I have had many dealings with small engines with water in the gas.  Also, my granddaughter told me she and her friend added gas to the golf cart before they took it down into the back field.  She said they used the red gas can that was in his shop.  Garey puts only premium gas in that can.

“I did tell Garey that the kids added gas, didn’t I?” I thought.

“No, you didn’t tell me the kids added gas,” Garey said, “Why would they add gas?  There was gas in it, besides when I asked Sabria if they had put anything in it, she said no.”

I went back up to the house, telling myself that I could have sworn I told him the kids added gas.

Garey showed up 30 minutes later with a clear bottle filled with mostly water and a little bit of gas.

“Look what was in the gas tank,” he announced.

“You mean there was water in the gas!” I said with mock surprise.

“The gas filter is waterlogged, so I’m going to change that too before I add new gas,” he said, “That should fix it.”

“I know you say I don’t use reason enough, but I think you should use intuition more,” I told Garey, “Reason tripped you up this time.”

“No, reason didn’t trip me up,” Garey said, “What tripped me up was not having all the information, namely that the kids added gas to the golf cart.”

“Well, I knew they added gas, and I knew they used your red gas can that only has premium gas in it, and is always kept in the dry in your shop, but I still felt like there was water in the gas,” I argued.

“And it has a brand-new fuel pump,” I thought, but didn’t say.

G.K. Chesterton said, “A woman uses her intelligence to find reasons to support her intuition.”