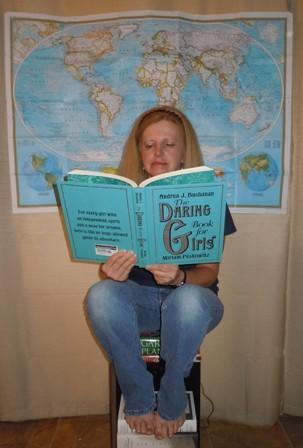 When I was a little girl, my stepmom bought each of my younger sisters and me baby dolls from different ethnic backgrounds.  We added them to our collection of plastic children, pretending that they were adopted.  I didn’t realize until I was grown that she was teaching us about difference and acceptance.  It was rural Kentucky in the 60’s.  She was a woman ahead of her place if not her time.
Last week at Walmart, I had to ask three tall people—anybody over five feet—to retrieve items from top shelves that were out of my reach.  By the third person, a woman who pulled a package of Johnsonville sausage from the top shelf of the refrigerator case, I was pretty frustrated.
“I’m used to this,” she said, “My daughter is your height and my son is a primordial dwarf.  He never let that stop him, though.  He always climbed up and got what he wanted.”  She continued, “He was a professional wrestler for fifteen years and travelled all over the world.  He married and has a son who is just like him.”  I could hear, not just acceptance, but pride in her voice.
I thought about that mom when I was in the checkout line.  If I had had a son who stood out so differently from those around him, it would have broken me in half.  The fear of him being rejected would have paralyzed me.  I would have interfered.  I would have tried to make things work for him.  I wouldn’t have been as wise as his mother obviously was.  She had the good sense to stand back and let him make a place for himself.  There are some things you shouldn’t try to fix.
Then there is the girl I went to school with.  The girl who became pregnant her junior year in high school.  The girl who had a disfigured son, a son whose father would have nothing to do with him, a son who went all the way through school without a single friend by his side.  When she went to watch her son graduate, she said she looked around at the large senior class and thought, “Couldn’t one person have been his friend?  Just one person?”  There are some things that you just can’t fix.
I’ve always told my husband, Garey, that the reason I am such a fix-it person is because of the responsibility that was put on me at an early age.  I am a hyper-vigilant crazy woman around children.  I was with my own children, I am with my granddaughter, as well.  “I had to watch out for everybody,” I say.   “I had to keep them (my younger siblings) from getting hurt or from crying or from getting into trouble.  When you do that for years, it becomes engrained in you and you can’t be different,” I argue.
All of those things are true, but the biggest truth is that I think everything that doesn’t fit needs fixing.
One day, my oldest daughter said to me, “Mom, you’re pretty high maintenance.”
“She just doesn’t understand,” I thought.  But I have since realized that she does.  She has had her own struggles, struggles I tried to fix, but couldn’t.  She has made a life for herself and her daughter, a daughter whom she lets learn things for herself, a daughter whom she picks up and brushes off when she needs comfort.
One day, my granddaughter looked around at all of the toys scattered across the living room floor.  “Big mess, Gee,” she said.  I knew those words had come directly from me, so I hurried to correct things.  “It’s a big perfect mess, Baby,” I said, “One big perfect mess!”