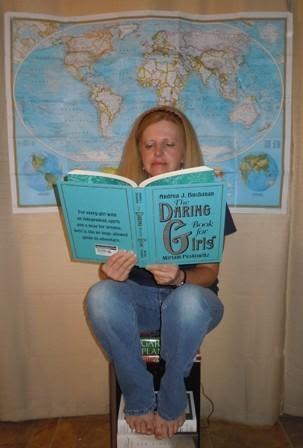 “What are you doing on the couch, Gee?” she asked.

“Sleeping,” was the answer I wanted to give, but didn’t.

“Come back to bed with me,” she said.

Back in her bed, she pulled the covers up under our chins then said, “Mama said you need to remember to put sunscreen on me in the morning, because our field trip is to the ballpark.”

“I’d better write a note just in case,” she said, as she climbed out of bed, turned on the light then tore a strip of notebook paper and wrote sunscreen with a crayon.  “Now, that will remind us,” she said.

“Okay,” I said, barely conscious of what she was saying.

She threw her arm up over her pillow then said, “My armpits smell.  I’d better put on deodorant in the morning.”  Out of bed she crawled, the light was on, notebook paper tore and the crayon wrote.

“How do you spell deodorant?” she asked.

I told her, she wrote the word down and climbed back into bed.  I thought that was the end of that, but I was wrong.  In her class at school, they have been breaking down words and discussing how those words were put together in the first place.  Sabria thought three o’clock in the morning would be the ideal time to analyze the word deodorant.

“Sabria, I promise if you’ll let me sleep, I will find out what ant has to do with it, and I will get back to you.”

“Okay, Gee,” she said.  She did let me sleep, and I did find out what ant has to do with deodorant.

According to dictionary.com, ant is a suffix, forming adjective and nouns from verbs that have French and Latin loanwords like pleasant, constant and servant.  If ant is added to words with English origins, ant has the general sense “characterized by or serving in the capacity of that named by the stem word.”  Words like ascendant, defendant and contestant fall into that category.  In technical and commercial usage, ant is added to nouns “denoting impersonal physical agents.”  This is the category where Sabria’s word deodorant fits, as well as words like propellant and lubricant.  Clear as mud?  Yeah, I thought so, but it seemed to settle things for her, and it will be one less excuse she’ll have for waking me at three o’clock in the morning, the next time I spend the night with her.

As far as I’m concerned, ant will always be the little crawly thing and its multitude of relatives I try unsuccessfully to rid my strawberry bed of each year; although recently, I have become very appreciative of the little critters.  Before she passed away, my friend, Joyce Neighbors, gave me a peony bush.  That was seven years ago.  This year, for the first time, it had buds.  I noticed ants crawling all over those buds.  I was alarmed until I read that the ants help the peonies bloom by chewing away at the tight leaves that enclose the buds.  Who knew?  Sure enough, the blooms burst forth almost overnight.  The flowers are pleas-ant, abund-ant and luxuri-ant.  I’m going to stop now before what I’m saying becomes redund-ant.