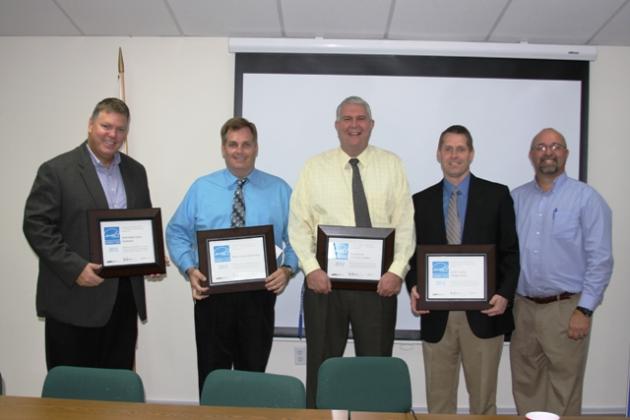 The Morgantown-Butler County Chamber of Commerce held its last luncheon of 2012 at the Butler County Extension Service office on Thursday, September 27. The Chamber announced the newly-elected board members: James Runion, Shirley Allen, and Randall Gaskey.  Chamber President Jamie Chaney welcomed all who attended the dinner; the meal was catered by the Green River Caterers.

The guest speaker for the luncheon was Jimmy Arnold from the Butler County Board of Education. Arnold micro-manages the utilities for the entire school district.
“Energy Management for Butler County started in 2004 under then Superintendent Larry Woods,” added Arnold.  We entered into a Pact Agreement with Harshaw Trane and started saving money.”
According to Arnold, the Butler County School District is the first district in the state of Kentucky to have all schools qualify for Energy Star and was the Most Efficient District in 2011 with EUI(Energy Use Index) of 40.27 kbtu/ft2.
The principal of each school was presented an Energy Star Award for 2012.

The Community Improvement Award went to Chad Johnson, who has recently opened two new businesses.  Johnson has opened an Auto Sales component to his existing body shop, wrecker service, and auto service shop.  He also added self storage units at the same location on Hwy 231 in Morgantown.
Upcoming events:  October 9th- Annual Chamber Awards Dinner, October 13th-Harvest On The Square and December 1st Christmas Parade.
The "Know Your Community" questions were sponsored by the Chamber of Commerce. The September Luncheon was sponsored by the Butler County Board of Education.