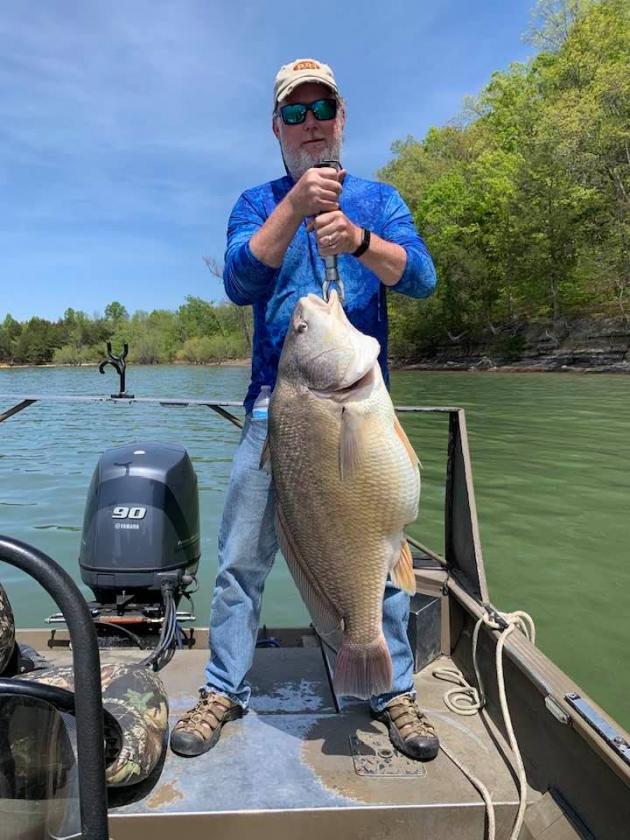 Alan Cooper of Morgantown shattered the state record Monday when he landed a 42lb., 13 oz. drum while fishing at Dale Hollow Lake. According to Cooper, he, his brother and their 89-year-old father were using the Rainbow Guide Service to land some smallmouth bass.

On 10 lb. test line, Cooper landed the state record drum, according to the guide's scales. The fish weighed around 43 lbs. After finally getting the fish in the boat, not realizing it was a state record, they released the fish back into the lake. Cooper, just out of curiosity, searched the state record and figured out he had a state record fish. The drum was still floating on top of the water after the intense struggle of being caught. With the help of the guide, they were able to retrieve the fish. They proceed to get an official weigh-in and the correct forms to fill out with the Kentucky Fish and Wildlife.

They attempted to weigh the fish in Burkesville at Ace Hardware, IGA, and finally were successful at the local feed mill.

Cooper plans to mount the fish.

The Kentucky State Record for a freshwater drum was 38 pounds and was caught by Larry Cardwell, also of Morgantown, in the Green River on June 5, 1980.