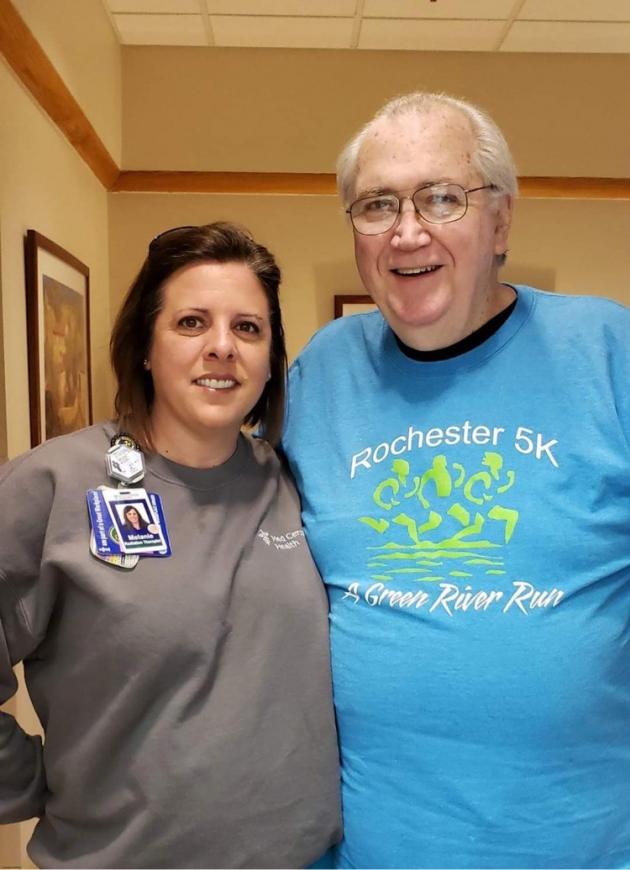 I'm writing this in the hopes of helping someone else and emphasizing that "Compassion is a Choice. "

December 2017, Dr. Matthew Rutter, Oncologist, walked in the room and told me I had prostate cancer, but it was treatable, I would not die from it.

February 2018, I entered the Cancer Treatment Center located at the Medical Center in Bowling Green. One of the first things I noticed was how caring and thoughtful everyone was. I'm very apprehensive, having several family and friends pass from cancer, I was hoping to not be added to that list.

I walked into the room for my first forty-five Radiation Treatments, Melanie Wilson, Radiation Therapist, informed me what was going to happen. She was talking, but still, I didn't hear a word she said; my mind was a thousand miles away. After a few treatments, I calmed down, and Melanie made me comfortable by asking questions, what do you do in Morgantown, what are your hobbies, how many grandchildren do you have? Everyone knows I like to talk and tell stories, but I realized they had patients after me, so I kept my stories to one or two minutes. Radiation treatments are five days a week; after a few weeks, I started bringing in a few fossils for show and tell. After making friends with the entire staff, I brought in a display case, and we had a quick fossil lesson of horse, bison, mammoth, sloth, alligator, and other fossils I had collected over the years.

The radiation treatments did not slow me down, and when we completed them in May, I had two new storytelling friends, Melanie and Holly Minton, also a Radiation Therapist. The entire department had shown me compassion, and I was very grateful.

I was born and raised in Florida, were all those years in the sun catching up to me?

Dr. Richard McGahan has been the Medical Director for Radiation Oncology for twenty-six years at the Cancer Treatment Center for Southern Kentucky, located at the Medical Center. "It is just as important to treat the mind as it is to treat the disease; I have a great staff who realizes the importance of meeting the patient's needs."

I have told Dr. McGahan several times over the past two years that he has the best group in Kentucky, from Beth, the receptionist to Elizabeth, the nurse, and everyone else.

March 16, I had a consultation to begin my next thirty radiation treatments, a few days earlier, I had asked to be put on Melanie's team. There are two radiation rooms, the door opens, and Melanie walks in and thumps me on the forehead, you didn't have to get cancer again to see us, we laughed and talked for a few minutes prayed, and she said, see you in two weeks.

March 30, I walked into the radiation room, and there in full battle gear were Melanie and Holly, face shields, masks, gowns, and gloves. The world had gone crazy because of the COVID 19 virus. I told them that if we couldn't finish the treatments for whatever reason, I would have no hard feelings against them, they both raised their shields and told me I was getting treated. With tears in my eyes for the second time in two weeks, I walked over to the radiation table. On the second day we picked up where we left off two years earlier, I would tell a story about fossils, painting, camping, canoeing or something else, some days they would tell me a story, I looked forward to being with my friends.

"Compassion is a Choice "my definition of Compassion: seeing someone going through a difficult time of life and doing something about it.

That two minutes they gave me made the difference between wanting to get treated and having to get treated. The last two weeks of radiation and the following ten days were very, very rough. I lost my appetite, couldn't taste anything, constant sore throat, and lost 25 pounds.

May 18, I woke up at six am and felt halfway decent I had not shaved in three months, I got up, shaved, and took a long hot shower. Drove into Morgantown and told Diane Dyer, I'm alive and want to start writing again, she laughed and told me to go ahead, you know what to do.

Don and his granddaughter Lindsey

Even though I have had cancer twice in two years, I consider myself very blessed, my daughter Becky Richardson and my son-in-law George took great care of me along with my granddaughter Lindsey. Several friends offered to pick up prescriptions or groceries; they were also praying for me; I am blessed.

I was very fortunate and did not need the Butler County Cancer Assistance program's services, but I wanted to include them in case someone else needs them.

Richie Bratcher is the chairman of the program, which has been in Butler County since 2007; he commented, "We are here to help Butler County citizens."

They can help with gas cards, medications, supplies, and provide a ride to treatment if necessary.

Their primary fundraiser, the Rib Eye Steak Dinner for six dollars, has been put on hold because of the pandemic. Local volunteers donate all the baked goods, drinks, and bread, and Double E Vending gives the chips.

Richie and the Board are all volunteers for the Cancer Assistance program and share very much empathy with local cancer patients.

If anyone wants to talk to me, I'm on Facebook or leave a message on this story.

Nobody should go through cancer alone.