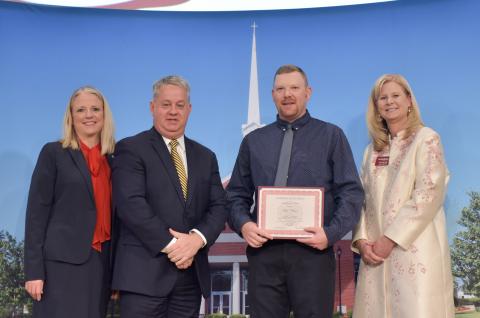 CAMPBELLSVILLE, Ky. –“Children still need teachers who care about them and believe in them … create environments where they feel safe and happy. They still need teachers who are patient and work hard to help them learn and grow. It’s as simple as that, not always easy, but always worth the effort. Always.” – the late Suzanne Dennis, who was 64 at her death.

Laura Beth Hayes, the daughter of the late Suzanne Dennis, read this writing from her mother about teachers at Campbellsville University’s 33rd annual Excellence in Teaching Award Program Ceremony May 11 in Ransdell Chapel.

Hayes, who has taught 16 years and is a former Excellence in Teaching Award recipient, spoke before 197 teachers who were honored from 68 school districts in the Commonwealth of Kentucky.

She was the recipient of the Excellence in Teaching award early in her career and was the 2016 recipient of the WHAS ExCEL Award for Elizabethtown Independent Schools. She was recently named “Wednesday’s Woman” by The News-Enterprise in Elizabethtown, Ky., for her work at school and in the community.

In her address, Hayes quoted her mother, who had taught for 37 years and was a graduate of Campbellsville College. She said her mother dedicated her life to teaching but had begun to struggle with feelings of being “old,” as her 37th year quickly passed.

She was distraught with the decision to retire, to the point where she was physically ill, and, in her words, felt like her life was ending.

“All she ever wanted to be was a teacher,” Hayes said. “She worked tirelessly for more than three decades and the thought of living life without her beloved students was almost too much for her to accept. These struggles consumed her thoughts.”

“She was the kind of teacher who preferred to stay under the radar and would much rather accumulate drawings from her students than accolades or awards.”

Hayes said her mother was not going to sign her letter of intent to teach for another year, but she actually changed her mind and decided not to retire, and she seemed to be feeling better.

On the morning of March 13, 2017, Dennis was driving to school and she crashed into a tree going 55 MPH due to some type of cardiac event. She died instantly – visible to students and families as they drove to school.

Dennis was honored in many ways after her death. Over 1,000 people attended her visitation and more than 500 people were at her funeral.

Awards were given in her honor, her school library was named after her, scholarships funds were created, trees planted, essays written and coverage from news outlets and social media exploded, her daughter said.

“It was extremely difficult to even comprehend the impact that she had made on others,” Hayes said. “It seemed unfathomable that, just a few weeks prior, she questioned her worth and value as a teacher. Oh, how I longed for her to see the expanse of love and admiration that was revealed.”

“What a mighty legacy she has left behind. And, in spite of her absence on this earth, she is still teaching others.”

Hayes challenged the teachers at the ceremony to “find joy in the small moments. Embrace the mundane and the daily challenges that taunt us with the false notion that what we do isn’t important enough or doesn’t matter.”

“Find confidence in knowing that wiping noses, sharpening pencils, grading stacks of tests and engaging in the antics of teenagers is part of the work – and a meaningful part of the work.”

She urged the teachers to “love your students – and your colleagues – in the simplest yet most sincere ways. For these are the moments that will define our careers. These are the memories our students will recall when they see us in the grocery store or look at their old yearbooks.”

“These are the things people will speak about as they read your obituary or stand at your funeral.”

Hayes congratulated the teachers and said, “Thank you for already being the type of educators that will be remembered -- and cherished -- for years to come. Thank you for remaining faithful to a profession that does not always feel rewarding and can drain your time and energy.”

“Thank you for the big love you show in the smallest of ways every single time you start the day. Your honor today is a privilege and a moment I hope you will always treasure.”

“But beyond any accolades of today, I hope your experience has been a wonderful reminder that school is not something to package or define. We cannot step back on the mount and risk losing sight of perspective -- or our students. Let’s open our eyes to the ‘so much more’ of education. My heart, and the hearts of your students, will continue to grow for years to come

Dr. Shane Garrison, vice president for enrollment services, gave the benediction for the ceremony and announced, as of July 1, Campbellsville University will be lowering the current graduate education tuition of $399 per credit hour by $100 to $299 per credit hour. This will make Campbellsville University have the lowest graduate tuition of any college or university in the Commonwealth of Kentucky.

Dr. Donna Hedgepath, provost and vice president for academic affairs, and Dr. Lisa Allen, dean of the School of Education, welcomed the teachers to the ceremony and gave out the awards to the teachers.

Hedgepath, a former public-school teacher who is a member of the Kentucky Education Professional Standards Board, said the Excellence in Teaching (EIT) Ceremony is one of her favorite events Campbellsville University does, and, “We appreciate you so much.”

Allen, a former English teacher, said her mentors in teaching weren’t afraid and were risk takers and motivators. “I know you are leaders of teachers and are excellent in teaching. Thank you for the privilege of honoring you.”

Dr. John Chowning, who serves as executive assistant to the president of Campbellsville University (Dr. Michael V. Carter) for government, community and constituent relations, talked about the history of the EIT program and said Campbellsville University, under the leadership of former president W.R. Davenport, stepped forward and joined with others in that period in showing support for public education and teachers by launching EIT in the Fifth Congressional District where Forward in the Fifth operated and then later expanded statewide.

“This is a small way in which we can honor you who are very dedicated school teachers,” Chowning said. “This is your day. We celebrate you. Thank you for all you are doing,” he said.

Chowning announced the names of the teachers receiving awards.

Katherine Bonds, soloist, sang “Getting to Know You” from “The King and I” and “Legacy.” She was accompanied by her husband, Corey Bonds, assistant director of bands at Campbellsville University and instructor in music.

The Excellence in Teaching Awards program is in partnership with Lexington’s CBS-affiliate, WKYT-TV.

The Excellence in Teaching Award recipients include the following with their superintendent listed first:

He is the son of June and Leon Wilson, of Morgantown, Ky., and is the husband of Tracy Wilson, and they have three children: Tyler, Tayten and Trey Wilson.

She received her Master of Arts in Exceptional Education from Western Kentucky University and her Bachelor of Science in Business Administration from Berea College. She graduated from Garfield High School in Hamilton, Ohio. She is a National Board Certified Exceptional Needs Specialist.

She has three children: Hunter, Taylor and Kendall Cardwell.

She received her master of arts degree from Western Kentucky University in 2006 and her bachelor of science degree in 2001 respectively. She graduated from Butler County High School in 1992.

She is the daughter of Danny Jones, of Morgantown, Ky. and the late Brenda Jones and is the wife of Ron Velton Glass. They have three children: Chance Alan, John Conner and Colten Ray Glass.

Campbellsville University is a widely-acclaimed Kentucky-based Christian university with more than 12,000 students offering over 100 programs of study including Ph.D., master, baccalaureate, associate, pre-professional and certification programs. The university has Kentucky based off-campus centers in Louisville, Harrodsburg, Somerset, Hodgenville and Liberty with instructional sites in Elizabethtown, Owensboro and Summersville. Out-of-state centers include two in California at Los Angeles and Lathrop, located in the San Francisco Bay Area.  The website for complete information is www.campbellsville.edu.
Campbellsville University is accredited by the Southern Association of Colleges and Schools Commission on Colleges to award certificates, associate, baccalaureate, masters and doctoral degrees. Contact the Commission on Colleges at 1866 Southern Lane, Decatur, Georgia 30033-4097 or call 404-679-4500 for questions about the status of Campbellsville University.