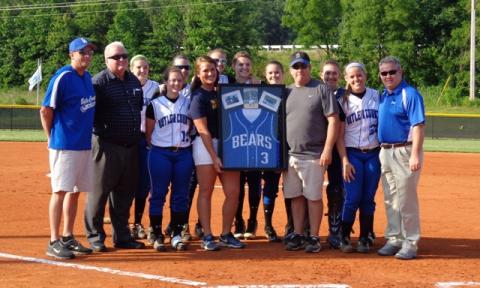 The Butler County High School Bears' softball team retired the #3 jersey worn by former standout pitcher CheyAnne Gaskey during her 7-year playing career at the school. The ceremony will took place on Wednesday, May 16, just prior to the Bears game against Breckinridge Coutny at the Butler County Baseball/Softball Complex.

Gaskey, a two-time KHSAA First Team All-State player, picked up 118 pitching wins and recorded 1,509 strikeouts during her playing career. She was named the Third Region Player of the Year in both her Junior and Senior seasons, as well as being named to the East-West All-Star Game both seasons.  At Butler County, she led the Bears to back-to-back 12th District titles and a pair of Third Region runner-up trophies. Gaskey signed with the Murray State Racers and compiled a 9-3 record in 24 appearances during her freshman campaign.

"CheyAnne was obviously a tremendous player for us, as well as an outstanding individual," said BCHS coach John Embry.  "Her dedication to our softball program and numerous on-field accomplishments make her worthy of this special honor.  When you think of #3 in Butler County Softball, you think of CheyAnne."