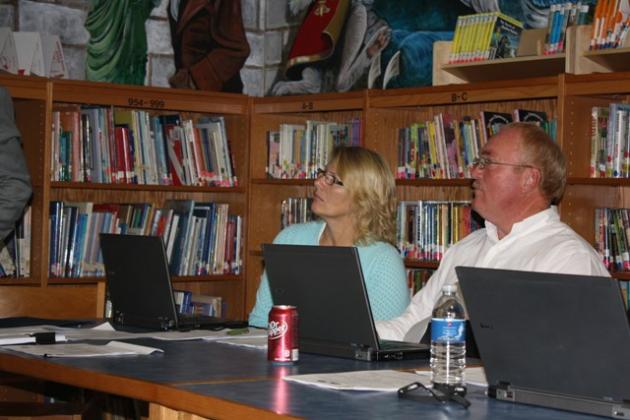 Cody Donaldson, Kyllie Doughty, and Latisha Cardwell were recognized for receiving the Donna Hornsby Joint Technology Award.  The group received $400 for the school and has decided to purchase E-books.

“The students used a variety of new technology to learn about natural disasters,” said Doughty.

During the Superintendent’s report, Mr. Howard told the board about recent events he has attended.  He said he had the opportunity to present Jordan Bryant the Outstanding Youth Award at the Annual Chamber of Commerce Dinner and Awards program.

“Jordan is such a fine young man and has just completed his Eagle Scout requirements,” said Howard.

Mr. Jimmy Arnold spoke to the board members about the district’s energy utilization during the past year.  Arnold reported that all schools in the district received the Energy Star Award, explained how each school functioned from an energy standpoint, and the money saved by the district.