Butler County Salutes Our Veterans, Honoring All Who Served 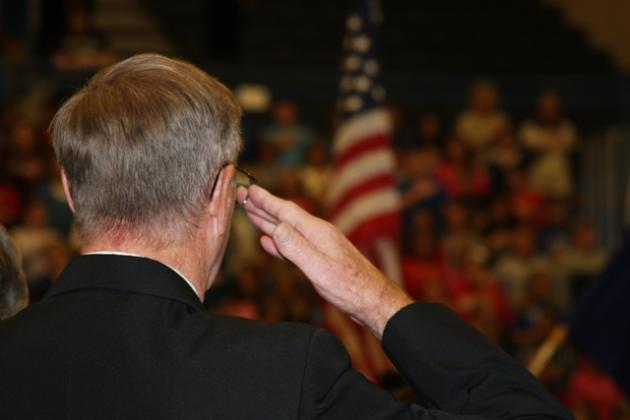 The Butler County High School gymnasium was the site of the community Veterans’ program on Friday, November 11, 2011. Keynote speaker Captain Brian Duffy described the event best, “This community does an outstanding job of honoring your Veterans and teaching your children to do the same.”

“We must all remember that Veterans, by their service, have said, “I will give my life for you.”
“Veterans’ Day is a simple day, that allows you to take the time to honor Veterans,” said Duffy. Do not wait, take the opportunity to thank a Veteran.”
Duffy a veteran himself flew C-141s in the Air Force before flying for UPS. He also has a special passion for World War II Veterans. About 1,200 World War II veterans in the country die each day, he said.
Because of Duffy’s leadership more than 1,000 Kentucky World War II veterans have been transported to Washington, D.C., to visit the memorial dedicated to the battles they fought.
Butler County students from preschool to seniors participated in the Veterans’ Program.
Mr. Jeff Jennings, principal of Butler County Middle School welcomed the large crowd.  The Butler County High School NJROTC presented the colors, and the Cub Scouts and Boy Scouts of Butler County led the Pledge of Allegiance.

The BCHS Choir performed the “Star Spangled Banner, and “My Old Kentucky Home.” The invocation was given by Darryl Dockery.

Senator Mike Wilson, also a Veteran, gave the opening remarks.  “We must all remember Freedom is not free.  It is an honor to be here today, this is the third year I have attended and this is always one of the best programs,” said Wilson.

Mrs. Gaddie’s preschool class performed a patriotic medley to the delight of the crowd.