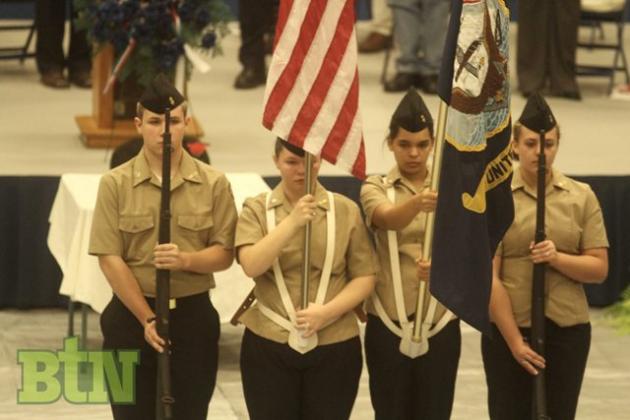 The community gathered on Friday at the Butler County High School gymnasium to honor all veterans.  Young and old alike participated in the program organized by Mrs. Linda Tyree.

Keynote speaker, Sgt. Todd Porter, Kentucky Army National Guard, Bowling Green Police Officer, and BCHS graduate, reminded everyone about the history of Butler County in honoring veterans and shared what an honor it was to wear his uniform.
“I feel better about myself when I put this uniform on, it allows me to honor the ones that came before me,” said Porter.
Porter said Butler County was one of only two locations in the state of Kentucky to have a monument honoring both the Union and Confederate Army.  He also reminded everyone that Butler County is named after a veteran.
“Butler County has a rich history of honoring veterans, many came to Butler County in 1790 and early 1800’s and received free land for their service in the Revolutionary War,” added Porter.
According to Porter statistics show that only 1% of high school students will enter the military.
“I challenge the other 99% to honor their service.  When people come together to honor veterans, good things will happen,” said Porter.

The fifth graders from North Butler Elementary sang “God Bless the USA” under the direction of Mrs. Sandra Crowder.  Mrs. Tyree recognized three ladies, Lynda Knight, Jane Eaton-Henderson, and Jennifer Odle for their support and hard work for all veterans.

The Butler County Concert Band performed the Armed Forces Medley while Doug Odle recognized the veterans in attendance.  There were: 6 Marines, 9 Navy, 5 Air Force , and 28 Army Veterans in attendance.
The VFW Ladies Auxiliary #5837 conducted the MIA/POW ceremony and BCHS Senior Bradley Trent played “Taps” after a moment of silence for those deceased.

Army Veteran David Martin gave the closing remarks prior to the retiring of the colors.
Veterans attended a reception in the school library provided by the Butler County High School FCCLA under the supervision of Mrs. Kimberlea Embry.