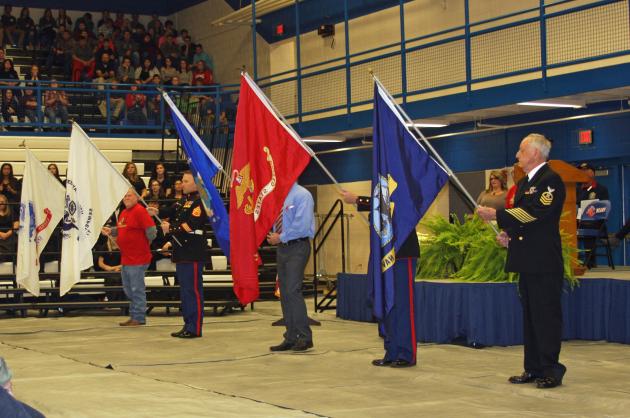 Veterans, their families, students, and community leaders gathered on Friday, November 11, at the Butler County High School gymnasium as part of a community Veterans' Day program.

Butler County Schools' Superintendent Scott Howard kicked off the ceremony and welcomed those in attendance.  Quoting President Harry Truman, Howard said the debt we owe to our veterans is one that can never be repaid.  The superintendent welcomed veterans, described the program as "one of the best we do" and thanked organizer Linda Tyree for her work in planning the event.

"This day is tough for me but special," said Howard.  "My dad died before I got the job as superintendent and he was a Vietnam veteran.  For that I am extremely proud … wish I could have told him that more."

Mr. Howard described one regret  - he and his father had plans to visit the Vietnam Memorial in Washington D.C. but never made it.  Howard later did visit the memorial and he looked up all the Butler County names.

In praising veterans and their sacrifices, Howard said, "we are the home of the free because of the brave."

The Parading of the Colors was done by the BCHS NJROTC under the leadership of Chief Jim Melton and Major Robert Redmond.

"The Star-Spangled Banner" was performed by the North Butler Elementary 4th/5th Grade Choir under the direction of Sandra Crowder.  She was accompanied by Jordan Evans and Jennifer Scott.

The invocation was given by Pastor Joe Tolbert of Cool Springs Baptist Church.

Gail Gaddie's preschool classes perform a patriotic medley of music.  They were accompanied by Ryan Himes.

Student winners had to tell at least five people about the Buddy Poppy and were asked to write a letter to the president or mayor explaining what they would like changes in the country or our community.  Winners participated in the Veterans' Day Parade, will get to decorate a tree for the Festival of Trees, and take part in the Memorial Day program.

The Art for Heroes competition had six winners.  This year's theme was America the Beautiful.

Dana Phelps of  VFW Post 5837 Auxiliary recognized Ray Casson as the VFW Veteran of the Year.

Eddy Arnold, who was introduced by daughter Aspen Arnold, was the keynote speaker.  Arnold, a corporal in the United States Marine Corps, served from 1983-87.  He has also worked 29 years at TVA.  After thanking Linda Tyree and the school district for  sponsoring the Veterans' Day program, Arnold spoke briefly about what it meant to him to be a veteran.  He described his travels in the Marine Corps, various deployments, encounters with others while serving, as well as conversations with those who saw combat.

Arnold concluded his remarks on a patriotic note.

Veteran Doug Odle read the names of veterans in attendance.

"It is a privilege to do this," said Odle.

Bryant McClellan played "Taps" following a moment of silence and the colors were retired by the BCHS NJROTC to wrap up the program.

A reception was held in the library following the program.  The FCCLA students and sponsors, Mrs. Embry and Mrs. Minton, provided refreshments and served.