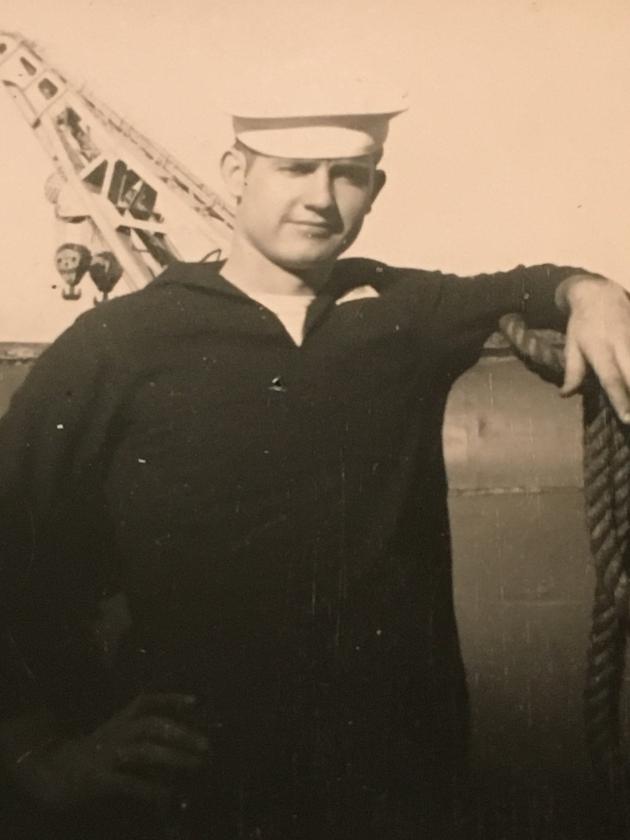 The Butler County NSDAR is recognizing Mr. Marshall G. Anderson Sr as one of our recipients as Veteran of the Year.  He joined the Navy April 15, 1949, arrived in Louisville and had physical, then boarded the train for Boot Camp at Santiago, California arriving there three days later.  My first assignment was to Millington, Tennessee from there to Board the USS Missouri, BR-63 to February 4, 1953.  On December 20, my assignment was the engineering department for repair, damage control, metal, and plumbing in the carpenter shop.  We were to service all fire fighting equipment.

Homeport for the Missouri was Pier 7, Norfolk, Virginia.  On June 25th, 1950, the Korean War started. We got orders to return to homeport for getting supplies and going to Korea.  The Missouri blasted ashore targets at Samchok and Pohangand then to Inchon to assist in the last stages of the invasion.

One storm, he was in while at sea was a typhoon off the East Coast of Korea, destroyed all vehicles and all that was aboard the first level.  They then had to go to Hawaii to recover items that were destroyed.

The USS Missouri, BR-63 moved to many areas as orders were given; some areas were the Panama Canal, Norway, France, Cuba, Haiti, and to New York for Armed Forces Day in 1952.  From there orders were to Norway, England, North Korea, Pearl Harbor, Japan, and Korea.

Marshall was discharged from the U S Navy February 6, 1953 at Seattle, Washington.

Mr. Anderson also noted he was from a family of 8 children, 5 boys and 3 girls,  all boys served in the military.  His parents were Robert and Vertie Anderson.  He is married to Gale and they have live in Butler County.