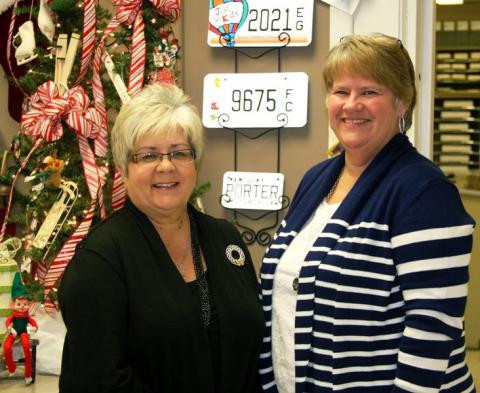 Shirley Givens started working in the courthouse in 1986 for then County Clerk Dallas Embry, her uncle.  She continued working in the office after Diane Ingram was elected in 1998. When Ingram retired in 2006, Givens was faced with the prospect of becoming a candidate.

"Oh, my gosh, I can't lose this time but I'm not a politician," said Givens.  "But, I thought, I'm going to try this."  Givens threw her hat in the political ring as a candidate and was elected Butler County Clerk in 2006 and took over in 2007.  She is finishing her second four-year term as county clerk.

"I ran with some great guys and hopefully I'm still friends with them today," said Givens.

Now, after 29 years of public service, Givens said "it's time to leave and try something else and enjoy our kids and grandkids a little more."

Givens said she has seen a lot of changes over the years in how the clerk's office operates.

"There are no simple transfers … things are more difficult with paperwork," said Givens.

One of the biggest responsibilities and most challenging tasks of the job of county clerk, according to Givens, is running local elections.

"It's a job in itself, one that I personally think a separate department should handle.  It's a job that needs full attention because there are always changes," said Givens.

Both Givens and Johnson said more records and deeds in the clerk's office are being scanned so they can be accessed easier by computer.

"We received a $20,000 grant and have an individual hired now who is scanning old records," said Givens.  "Soon maybe these records can be online so that people can access and print records at home."

Johnson agrees that technology is always changing things in how the office functions.

"Keeping up with technology is a lot of what we do to make sure we are current," said Johnson.

One new change anticipated in January will be Decal on Demand - a system that will impact how decals are displayed on vehicles.  Johnson will have more information on the new system in the coming weeks.

With her time remaining in office now down to a few days, Givens said she'll miss seeing all the people that she's served over the years.

"The best part of the job is serving the people of Butler County.  I enjoy talking to everybody and will miss everyone … but I'm still close and will be around," said Givens.  "It's been a great 29 years and I hope to get out and enjoy my family and not get any extra jobs," added Givens.

"She'll be fine.  Sherry is familiar with every job in this office and she has a great set of girls that will help her in any way," said Givens.  "She's ready to go and will do fine."

Describing running opposed as "wonderful," Johnson said she ran for county clerk to serve the people of Butler County.

"I love working with people and I love this office," said Johnson, who indicated that customer service is one of her top priorities.

"Customer service is one of the best things we do around here," said Johnson.  "We have a lot of guidelines to work within but helping people is important."

Johnson is looking forward to her new job.

"I appreciate everybody and I want everyone to know that we'll do our best to help you in anyway we can just like we always have,"  said Johnson.

The official swearing-in ceremony for newly-elected officials is set for December 30 at 1 p.m.  Johnson will officially take over January 1, 2015.  The county clerk's office will be closed Monday, January 5, due to a mandatory audit that is required anytime an office changes hands.  Johnson will attend a two-day training for incoming county clerks in Lexington on January 12-13 and another training on January 14.