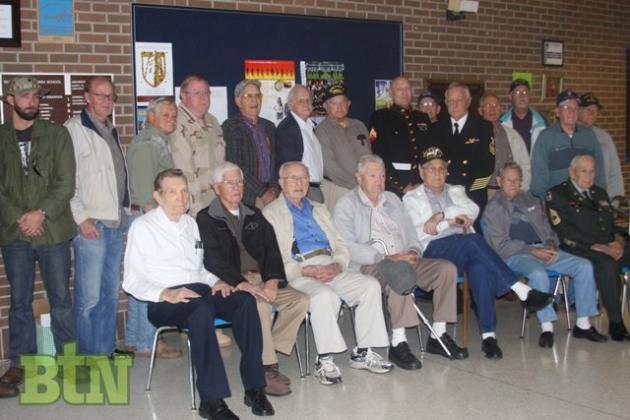 The Butler County Chapter National Society of the Daughters of the American Revolution held their Annual Veterans Breakfast on Saturday morning at the Butler County High School Commons Area. Regent Lynda Knight welcomed the crowd and 25 veterans in attendance.  Lois Russ , registrar, led the pledge followed by the invocation by Chaplain Linda Wood.  After a complete breakfast served by the DAR ladies, the Veteran of the Year was announced.

Rollie “Bubby” Porter was born July 4, 1926, in Butler County. He is one of five children born to Luther and Luda (Cook) Porter.  He married Joyce Flener in 1956.  Their only child, Timmy, was killed in an automobile accident in 1980.
Bubby was in the Navy during World War II from 1944 to 1946.  He served in the Cee Bee’s Naval Construction Battalion.  His training was at Great Lakes, Illinois.  Then he was sent to Rhode Island and on to Okinawa, Japan after the war was over.  He stayed there until he was discharged in 1946.
Bubby came home and finished high school, then joined the Air Force and served during the Korean War from 1951 to 1953.  He was stationed at Wright Patterson Air Force Base in Ohio for about two months.  From there he was sent to the Philippines for a little over a year.  On his way to the Philippines, by way of California, he rode a troop train for six days and five nights, in a box car that had only one window.  There were three trains that left for California at the same time carrying the troops, but each train took a different route for safety reasons.
Bubby admitted he was a little scared when they arrived in the Philippines.  He was on a C47 Military transport plane.  The pilot was supposed to be one of the best, but that didn’t make him feel any better when he was rolling all over the plane as they were zig- zagging between the mountains to get to the landing strip.  He kept looking for the strip and when he finally saw it, it was really small. Since the plane was big and the landing strip was small, that didn’t look to good to Bubby.  The plane did land safely.
Bubby was discharged from the Air Force in 1953.  He got an early discharge because his brother was being drafted.

All veterans in attendance were recognized.  In her closing remarks Lynda Knight reminded everyone, " Two little words mean alot, when you see a veteran say Thank You."