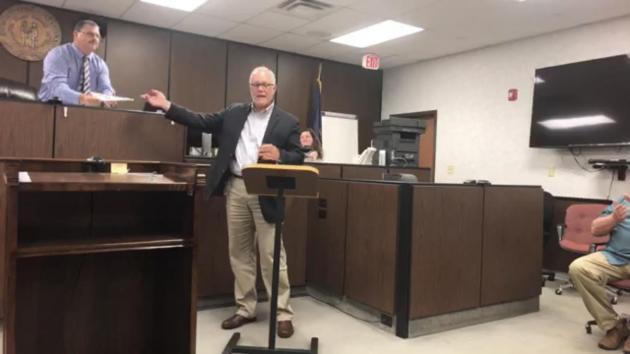 Judge-Executive Tim Flener first addressed old business regarding the previously tabled motion to stay with KACO Insurance. Fifth District Magistrate Dillon Bryant spoke with KACO representative Rob Brown on the quote given to the court. Brown explained that KACO has implemented a permanent dividend policy on a 10-year scale with yearly reviews. When questioned why the policy length was so long, Brown explained that by stretching out the claims, it will allow for more consistent results over a larger period of time. He also shared that an amount of $1 million will be provided in liability for the ferry workers to eliminate the need for an additional stand-alone policy. Brown described the loss ratio for Workman’s Compensation as “incredible” at 14% in the past 10 years. The motion was then approved.

Field Representative Mark Welch with Rural Municipal Aide gave a presentation on behalf of the department. Welch represents 45 counties on highway districts one, two, three and part of four. Public Information Officer Wes Watt was also present. Welch read a portion of the letter from the Department of Rural and Municipal Aid that Commissioner Gray Tomblyn II addressed to Butler County. Welch announced a total award of $312,086 in discretionary funds granted to Butler County by the Kentucky Transportation Cabinet (KYTC) for resurfacing work on Caney Fork Road and Love Brooklyn Road. The award was allocated to the county as part of Gov. Matt Bevin’s, “commitment to prioritize transportation infrastructure projects and increase economic opportunity across the Commonwealth.”

This brings the total amount awarded to Butler County to $647,747 for the fiscal year.

Welch discussed the limited funding that is available at both the county and state level and explained that because of this reason.  Gov. Matt Bevin has been working with communities across the commonwealth to prioritize infrastructure needs.

In the letter written by Commissioner Gray Tomblyn II, he states, “Judge Flener and fiscal court members, you have every reason to be optimistic about the future of Butler County and the commonwealth of Kentucky. I know you will continue to work hard everyday to make Butler County the best it can be…”

A motion was made to elect Brenda Longhofer as a member of the Morgantown - Butler County Tourism Commission. Judge-Executive Tim Flener said Longhofer served on the board for one year and expressed that she would be willing to serve three more years. The motion was accepted.

When asked what exactly the tourism commission does, Roger Southerland, chairman of the local tourism committe, spoke on the topic explaining that the board aids in coming up with ways that encourage tourism development in the county.  He also spoke on the success of the program and said that he was thankful to be a part of it.

Discussion occurred for the motion to approve and make payment for the Volunteer Fire Department Insurance in quarterly installments for the 2020 fiscal year. Whittinghill questioned the pricing on some of the buildings listed. Hocker Insurance Lead Agent Gina Tynes explained that the numbers are based on geographical location and that the prices would be non-negotiable for the area. Tynes expressed that she would be happy to re-evaluate the numbers and also noted that it must be taken into consideration the inside finish of the building and what else may be attached with the property.

A motion was made to take North Pitcher Road off of Butler County Road Maintenance. A public hearing was held earlier that afternoon at 3 p.m. with Jacob Gabbard in attendance. Gabbard stated that he recommended removing the road because it would help the county and would result in less maintenance work to be done. The motion was approved.

The last item of business was not included on the agenda and addressed the addition of an all way stop sign at Sha-Ro-Lay and Embry Loop. Second District Magistrate Kevin Phelps said citizens of that area got together and formed a petition with over 20 signatures in attempt to control the speed in that area. Judge Flener said that he believes this will be good for that area of the community given that they have been looking for alternatives for several years and that speedbumps were previously looked into, but not possible for the area.

The court then went into closed session to deliberate on the future acquisition or sale of real property.