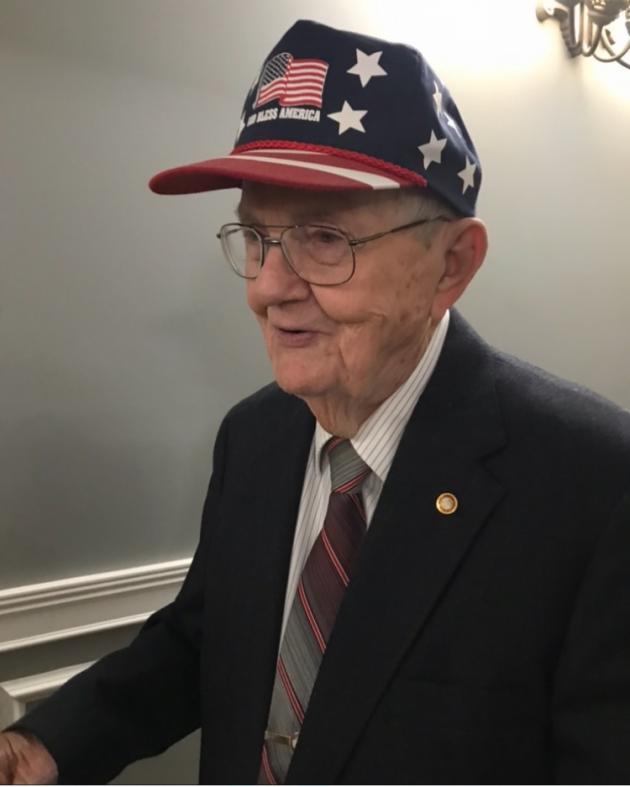 The Butler County Chapter National Society Daughters of the American Revolution honors William Watson Kitchens as one of our Veterans of the Year for 2020.

William Watson Kitchens, also known as "June," served in the US Navy from 1943 to 1946. He went through basic training at Great Lakes., Il, and then to Peru, IL, for one year. After that, he was sent to Detroit, MI, for one year and then to Melbourne, FL, for six months. He was then sent to France on a troop transport ship from Norfolk, VA. He went to what is now Pakistan, India, then back to Norfolk, VA. From Virginia, he went to Shanghai, China. From China, June went to Seattle, WA, and then back to the Great Lakes for discharge. At his discharge, his rank was listed as Ship Fitter, 3rd Class. He did construction repair of the ship. He said they gave him 3rd Class because he would not re-enlist.

June received the Good Conduct Medal and a ribbon.

After being discharged, June returned home to Butler County and could not find a job in four or five months, so he went to Indianapolis, IN and found work at Richardson Lumber Company. In 1957 he served as president of the Local #290 Lumber Workers Union. As president of the union, he got an invitation in March 1957 to have breakfast in Madison, Wisconsin, with John F. and Jacquelin Kennedy. He also got an invitation to John Kennedy's inauguration. He worked on the union staff as Assistant Director and was appointed Political Education Director for three years and was District #3 Director for over fourteen states. In 1985 while in Washington, on a business trip, he was invited to the home of Senator Ted Kennedy for dinner, followed by an interview related to his work with the union. This was his most memorable visit to Washington.

William Watson Kitchens was born on September 11, 1923, in Butler County. He now lives in Newburgh, IN. He is 96 years young and still drives anywhere he wants to go. He is one of seven children born to Ustus and Gusta (Ruley) Kitchens. He has twin brothers, and they are 92 years young. June married Wilma McDougall in 1944. They have two children William Rhoades and Curtis Scott, four grandchildren, of which two are doctors in Arizona and Lexington, KY.

The Butler County Chapter salutes William Watson Kitchens as our Chapter's Veteran of the Year. Thanks, June, for your service to the country.