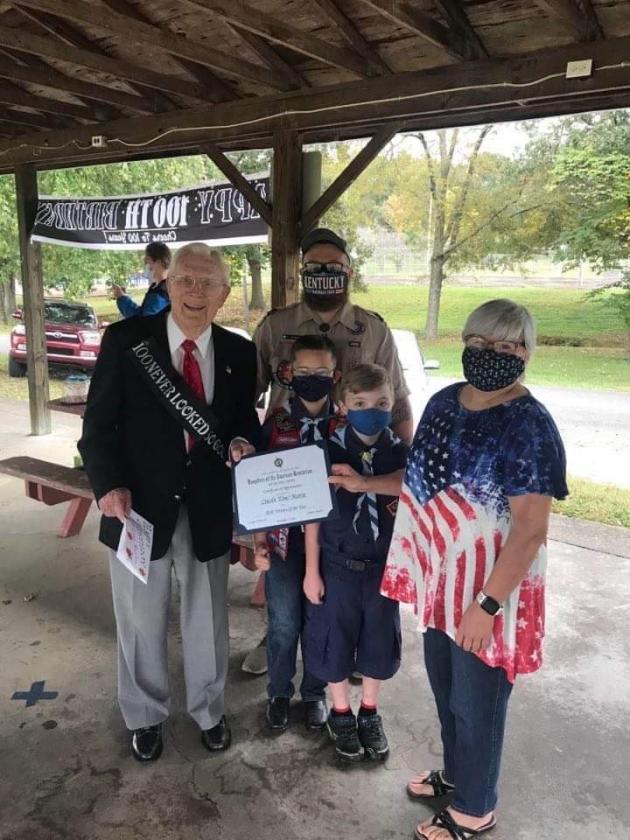 The Butler County Chapter National Society Daughters of the American Revolution honors Elmo Lincoln Martin as one of our Veterans of the Year 2020.

Elmo Lincoln Martin is also known as "Line," served in the United States Army's 99th Infantry Division. After being drafted, he served from 1942-1945. He was in basic training at Camp Van Dorn in Mississippi. From there, he was sent to Camp Maxey in Paris, Texas. He was then deployed to the European Theatre, where he was placed on the front line in Belgium, on the Siegfried Line. He fought in the battle of the Bulge as a Staff Sergeant, which was the last-ditch effort in Germany. The Battle of the Bulge was horrific. Line said the German tanks got beyond our mainline, and we made them walk back.

Line received no medals while in the Army. He says one thing he did get was frostbite. It was frigid there, and they nearly froze to death.

After discharge from the Army, Elmo Lincoln Martin returned to his beloved Bowling Green, KY. and Butler County, where he was raised. He only remained there for about 30 days because there were only two jobs in the area, coal digging and moonshine. He decided neither of those suited him. He had heard his uncles talk about jobs in Grand Rapids, Michigan, and the furniture business, so he packed up his wife and used his $350 discharge money and moved to Grand Rapids, Michigan. He said, "when I got there, they liked me," I went to work as a Marketing Engineer selling automobile trims. He was employed for 20 years. At the age of 52, he decided to start his own business as a Manufactures Representative. It was called Martindale Industrial Sales, where he managed thirteen companies. They did stamping and plastic until 2009 when the housing debacle caused a recession. He was 88 years old at that time and would not have retired, but companies were going broke and couldn't support him. Altogether he spent 32 years in Grand Rapids, Michigan. At age 88, he started writing books, one of which is available on Amazon called Butler County Memories, and he is in the process of writing Kentucky Sweet and Bittler Land. His daughter Susan moved back to Butler County from Lenior City, Tennessee, and bought a house that helped her renovate. He is still very active and in excellent health for 100 years of age. He likes to travel with his granddaughter Lena. Together they get history and pictures for his new book.

Elmo Lincoln Martin was born on October 10, 1920, in Bowling Green, KY. He was raised in Butler County on Long Branch School Road near Welches Creek, where he also went to school. His parents James Otis Martin and Pernie Oller. He had three siblings, a brother Otis and two sisters Bonnie and Irene. Elmo married Ruth in 1942; they raised four children Linda Ortiz, Sharon Palmer, and Richard Martin. They have one son deceased.

The Butler County Chapter salutes Elmo Lincoln Martin as our Chapter's Veteran of the Year. Thank you Line for your service, and May God Bless you.