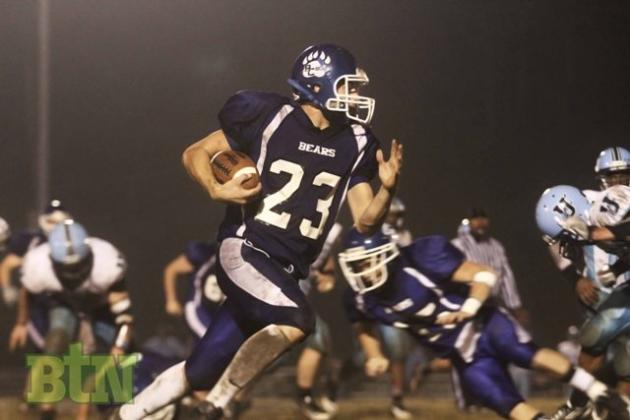 In a key Class 2A District matchup the Union Co./Butler Co. game provided plenty of fireworks and scoring for fans. Union Co. entered the game (1-5) overall; while the Bears (4-2) were hoping to rebound off a two game losing skid. A total of twelve touchdowns combined on the night, made the game appear more like a track meet than a football game, as both teams at times seemed to score at will.

Union Co. and Butler Co. also had to deal with field conditions more than ideal; as rain through most of the Friday morning hours caused the middle of the field to be slippery would be an understatement. Union Co. game plan was run the football, and a plan which saw the Braves eat up the clock dominating the time of possession controlling the ball for 28 of the 48 minute ballgame.
Union Co. on its second possession of the night capped off a scoring drive that went sixty-nine yards on eleven plays. The Braves QB Dennis Joiner ran it in from eleven yards out, the kick good Braves led 7-0 with 1:32 left in the first quarter of play. Butler Co. on the next series would go three and out, and have to punt the ball right back to Union Co. A short punt gave Union Co. great field position and took the Braves only seven plays going forty yards as Braves RB Kenneth Brummett was on the receiving end of a 5 yard pass from Joiner to take a 13-0 lead. Kick good, Braves led 14-0 with 9:05 remaining in the first half of play.

Trailing 14-0 the Bears put together on the next possession a thirteen play drive, which saw the Bears convert on two fourth down situations to keep the drive alive. The drive covered sixty-one yards and a two yard run by Bears QB Elijah Flener made the score 14-6, the Jake Martin kick was good score, score 14-7 with 4:43 remaining in the first half. With new momentum the Bears' kicking game executed a perfect onside kick, and Zeke Woodcock recovered the ball at midfield.
The Bears took only five plays to find the end zone; and on fourth and twelve the Bears QB Flener finds senior wide out Dylan Havens open who then raced twenty-nine yards for the touchdown. The kick was no good, but score now 14-13 with 2:30 left in the half. But Union Co. was not done, returning the kick to midfield the Braves drove forty-two yards in seven plays, and again Braves QB Joiner runs in for the three yard touchdown, kick good, Braves led 21-13 at the break.

The Bears opening drive of the third quarter saw the Bears across midfield at the thirty-seven yard line and threatening. But on second down and fourteen, the Braves secondary intercepted the QB Flener pass and returned it sixty-three yards for a Union Co. touchdown, the kick good. Union Co. led 28-13 with 10:09 left in the third quarter of play. On the next Bears possession on a second and two from the forty-two, the Braves defensive back Jarrell Foster intercepted the pass this time racing seventy-four yards for the Union Co.  touchdown, kick good, Braves now led 35-13 with 9:10 still left to play in the third quarter.
The Bears now trailing by 21, but with plenty of time left in the game; had to strike quickly and on the next possession it took the Bears only three plays, the key play a forty-five yard reception to Corey Johnson tackled at the four yard line. On first and goal QB Flener on the keeper ran it in; the two point conversion pass failed score 19-35 Bears trailed with 8:11 left in third quarter. The third quarter of play would finally come to an end. The Braves resorted to the running game to secure the lead and eat time off the clock; the Braves put together a fifteen play drive covering ninety-five yards as Braves QB Joiner ran in from eight yards out, his third touchdown on the night. The kick was good, 42-19 Union Co. with 7:58 remaining in the game.

The Bears responded and on the next possession in only two plays, QB Elijah Flener hits wide out Matt Moore for a fifty-three yard touchdown pass, the two point conversion pass to Moore was also complete brining the score 42-27 Union, with 7:13 still remaining in the game.
But the ensuing kickoff to the Braves took all the life out of the Bears as the deep back for Union Co. Silaf Harris raced ninety-five yards for the kickoff return touchdown, the kick good. Union Co. led 49-27 with 6:58 remaining. The Bears again responding to the call just three plays later on a third and one; QB Flener hits wide out Drake Embry for a fifty-six yard touchdown pass. The two point conversion run good by Flener. Score now 49-35 with 6:29 left to play. The Bears would get the ball back but the Braves secondary again would bring the comeback to an end on an interception with 2:40 to go in the game.