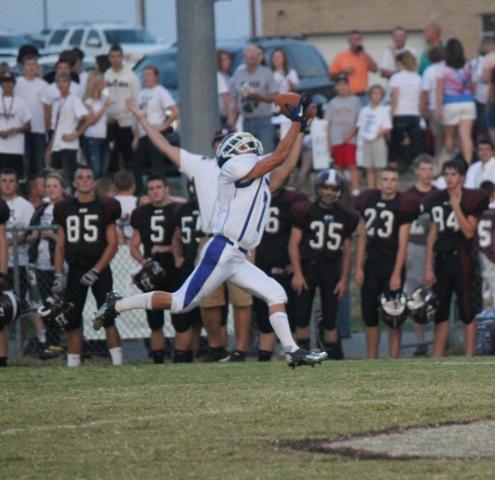 Butler Co. Bears moved to (2-0) on the season; the fallen foe this past week was the Breck Co. Tigers now (0-2).  The Bears took advantage of Breck Co.’s inability to take care of the football. Turnovers, five Breck Co. passes were intercepted by the Bears on the night, shutting down any hopes of the Tigers making a comeback who trailed 27-7 by halftime.

The Bears opening drive was capped off by a big play touchdown pass from quarterback Elijah Flener to wide receiver Walker Weathers; an 84 yard touchdown pass. The Jake Martin kick was good Bears led early 7-0 at the 9:32 mark in the first quarter of play. The next Bears score was a one yard quarterback sneak, Flener running it in; the Martin kick again good, 14-0 Bears at the 10:15 mark in the second quarter of play.

The Bears defense completely shutdown the Tigers offense, holding the Breck Co. rushing in the first half of a negative eleven yards.  A short punt one series later gave the Bears great field position at the twenty-six yard line going in. Six plays later,  on third and goal Flener would add his second rushing touchdown on the night from six yards out. The Martin kick good, 21-0 Bears with 2:56 remaining in the half.
The Bears fourth touchdown of the first half was setup by a Dylan Havens interception; the senior defensive back is off to an unbelievable start and always seems to be around the football when the other team throws his way.  Seven plays later on first and goal from the one; quarterback Flener took it in to make the score 27-0; the Martin kick went wide right no good.  The Breck Co. Tigers finally got on the scoreboard with a 79 yard touchdown pass, the kick was good and that brought the half to a close. Bears led 27-7 at the halftime.
The Bears took the opening third quarter drive 69 yards in eleven plays capped off by a Jake Martin five yard to make the score 33-7, the kick was no good. This score came at the 9:11 mark in the third quarter.  That would be the end of all the scoring with the exception of a Breck Co.  Thirty yard field goal with only 2:04 remaining in the game.

The game was never in doubt as the Bears spread offense passing attack, a tough defense; and punter Jake Martin repeatedly putting Breck Co. in terrible field position. The Tigers resorted to the air attack which cost them dearly, throwing a total of five interceptions; four of those were picked by senior defensive back Dylan Havens.