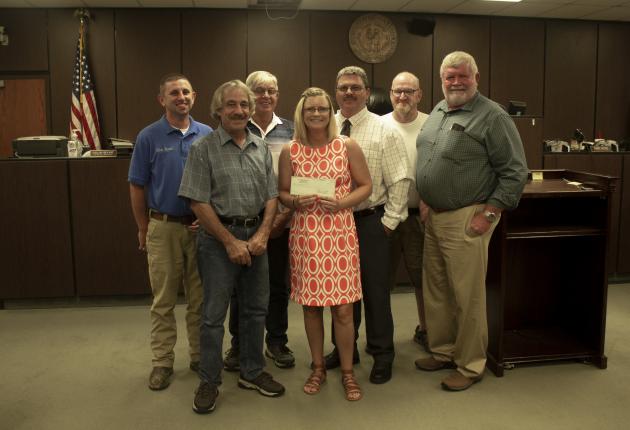 Old Business was addressed first regarding the construction and addition of 8 wings to the courthouse by USS Engineering. Judge-Executive Tim Flener said that after speaking with the engineer, it was confirmed that 8 wings per-side of the building would be efficient. The wings will come with a lifetime warranty.

Amanda White from the Boys and Girls Club presented an update on their summer program. White said that they have been able to serve 90 kids this summer. She spoke on the great amount of help that they have received from both youth volunteers and through a program called Three Corners. This program provided four additional employees who have helped them throughout the summer and gained workforce skills in the process.

“We're looking forward to growing our Boys and Girls Club so that we can accommodate more kids,” White said.

White also said that although they are currently limited on spaces, more room and help will be available when school starts back. Judge Flener and the fiscal court thanked White for her work at the Boys and Girls Club and presented her with a check for $12,500 to provide additional funds for the club.

A motion was made for the Butler County Jail to purchase and pay for 20 mats at $50 a piece not to exceed $1,000. Judge Flener explained that the need for this comes from the jail exceeding their capacity of 36 inmates. Flener said the current number of inmates is 65. Jailer Ricky Romans said that there will be about 10 more inmates coming within the next day. Flener and Romans explained that the jail is running out of room and are discussing the possibility of laying mats out in the chapel. Ricky said that the cheapest option comes from the Daviess County Jail who produces and supplies them at $50 per mat. The motion was approved.

Circuit Clerk Sherry Johnson provided information on the Board of Assessments, a board that meets yearly to discuss appeals. Johnson is one of the four members along with Easton Weathers, Donna Wilson and Joseph Henderson. Johnson said that because there were no appeals to be discussed, the board only met one day. Johnson explained that the Fiscal Court would write a check to each of the four members for $100 and would be reimbursed for half by the state. A motion was made to approve the payment to all board members.

Financial reports were provided for the first and fourth district fire departments. A member of the First District Fire Department discussed the need for repairs and said it would cost about seven to eight thousand dollars in repairs. The statements were simply for viewing purposes by the fiscal court and did not require approval.

A motion was made to approve transient room tax for months of January – June 2019 to Morgantown Butler County Tourism Commission for $12.75. This figure is regarding the Woodbury Bed and Breakfast and must be approved through the county, given that it is the only motel in Butler County.

A motion was approved to make a payment on Kevin Phelps for completion of 40 hours of training in the amount of $1,053.91. a vote of 4-0 took place with Second District Magistrate Kevin Phelps refraining from a vote on the motion.

A motion was made to approve to pay the Butler County Chamber of Commerce for Catfish Festival Advertisements. Judge Flener said the fiscal court was approved to pay $5,000 for advertisements but the bill was for $5,333. Third District Magistrate Timmy Givens made a motion to approve payment of only the $5,000 and was seconded by Phelps. A vote of 4-1 took place with Fifth District Magistrate Dillon Bryant opposed.

A motion was made to approve the payment of taxes on the Health Reimbursement Accounts. Flener said that through the Affordable Care Act, they are required to pay $2.39 per life at 28.75 lives. This brings the total amount to be paid to $68.71. The motion was approved.

Other items on the agenda included:

A Motion was approved for the payment for Litter abatement to 4th District Fire Department in the amount of $487.30

A motion was approved to pay Kentucky State Treasurer in the amount of $16,000 for architectural fees for CDBG grant for the senior citizen center.

A motion was approved to transfer $25,000 from general funds to the jail fund.

A motion was approved to advertise to take bids for cribbing and rails for Brooklyn Chapel Road.