Board of Education honors Supt. Scott Howard at his last meeting 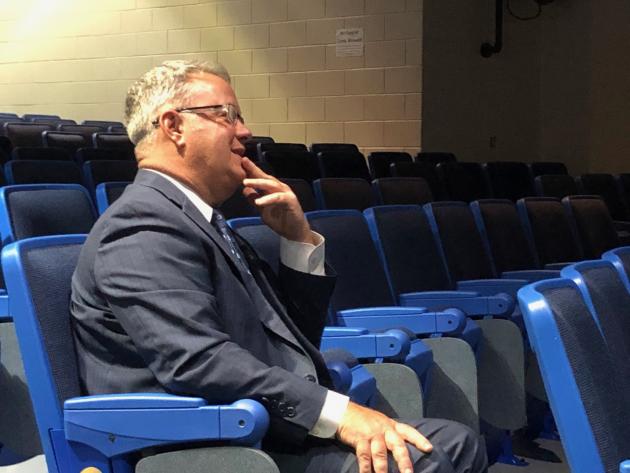 Emotions were clearly visible on Tuesday night as retiring Butler County Schools’ Superintendent Scott Howard was honored at what was his last regular-scheduled meeting of the Butler County Board of Education.  The meeting was held at the Butler County High School Auditorium.

Mr. Howard, whose family was present at the meeting, was presented with a video tribute featuring scenes and images from his 30 years in education and his 12 years as superintendent.  The video featured numerous photos, as well as messages from friends and colleagues over the years - all set to music. Board members also presented Howard with golf clubs and other gifts for his retirement, which officially begins July 1.

Board Chairperson Amy Hood kicked off the recognition portion of the meeting and spoke briefly about Howard as a friend, classmate, and educator.  Hood, other Board members, fellow educators, and others praised Howard for always putting kids first.  Multiple people stated that Howard  was always driven by the belief that “kids don't care how much you know until they know how much you care,” - a version of a quote attributed to President Theodore Roosevelt.

Howard watched the video and then offered some comments on his time as superintendent.

“I guess getting to be the superintendent of Butler County...you know it’s kind of like the ultimate goal of a little boy who went to Fifth District Elementary and grew up in the country,” said Howard.  “The superintendency takes everybody to get the job done from school nutrition workers, to bus drivers, bus monitors, teachers, principals, paraeducators, board members … I think the number one mistake any superintendent can make is not realizing that it takes everybody and you are only as good as the people you get to work with.”

An emotional Howard continued, “I just have a tremendous amount of love for every employee and the kids.  I’ve said a lot of prayers for the Butler County School System over 12 years and I will continue to do that because we are in tough times.  I’m humbled, I’m so honored.”

Indicating that sometimes people don’t say nice things about you, Mr. Howard expressed gratitude to his family for their support and patience during his tenure as superintendent.

“Everything I learned about treating people I learned from my mom,” said Howard.

Acknowledging that times are crazy and that “we’ll get through it,” Supt. Howard said the district is in good hands with incoming Superintendent Robert Tuck.

Mr. Tuck described Howard as a “mentor” to him during his years in education.

“We have to dig down deep and look for different ways to reach kids, something we should always be doing anyway,” said Howard.

Howard said he is retiring as superintendent with “no reservations and no ill feelings toward anyone.”

Editor’s Note:  Additional coverage from Tuesday night’s Board meeting will be reported separately.