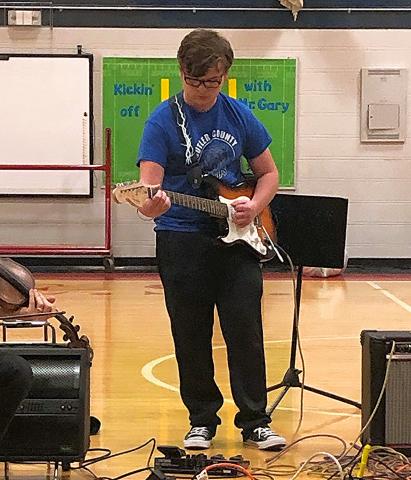 The Southern Kentucky Performing Arts Center (SKyPAC) partners with Limestone Bank, and the Kentucky Blues Society to take the Blues in Schools program to Morgantown Elementary.

The group is composed of keyboard player and vocalist, Kenny Lee, harmonica player, Lee Hammer and Chris Carmichael on the fiddle.

Butler County High School sophomore Bodie Hammer, who is a member of the Kentucky Blues Society, also performed with the group.  Bodie plays the electric guitar.
The group conducted Blues workshops, for fifth-graders followed by a performance for the entire student body. Each student participant in the workshops received their own harmonica provided courtesy of Limestone Bank and played during the assembly.

“The Kentucky Blues Society has been teaching Kentucky’s rich Blues history through the Blues in Schools since 2005, as well as involving students in Blues performance and musical techniques.
For more information about SKyPAC’s Arts Education Outreach programming call 270-904-5000.