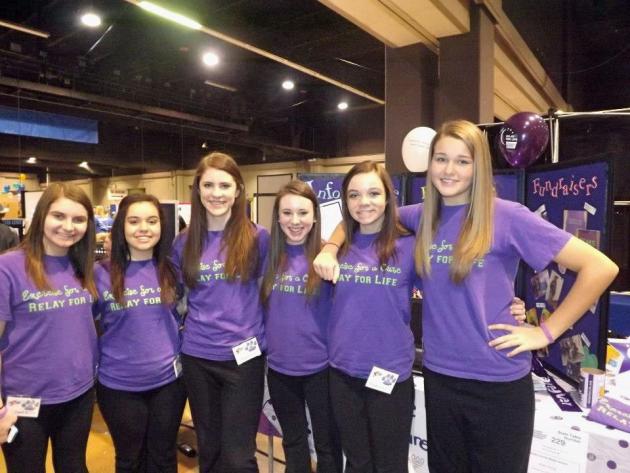 This has been a very eventful and competitive year for the BCMS Student Technology Leadership Program.  The group started the year off with presenting at JumpStart to introduce the incoming 6th graders to the program.  Once school began and the membership drive was over with 87 members, we then moved to prepare for the Regional Showcase competition at Western Kentucky University on December 6th.  We had four showcases competing:

·         Exercise for a Cure - Relay for Life.  Members: Addison Hall, Aspen Arnold, Alyssa Pace, Hayden Johnson, Madison Clark and Tori Shain.  This group provided many opportunities for the school and community to donate to Relay for Life.

·         Environmental Connectors.  Members: Lauren Tyree, Gracie Deel, Macy West, Haley Hope and Katie West.  This group’s focus on informing others of the importance of going green as well as helping Jr. Beta collect plastic tops for a bench and pull tabs for the Ronald McDonald House.

·         Bully Busters.  Members: Olivia Jones, Gracie Grubb, Kane Gott and Evan Johnson.  The purpose of this group was to bring awareness to facts about bullying and ways to prevent it.

All four of the showcase groups advanced to state scoring at least 105 out of 118.  At the Regional Showcase competition we also had Rylee McKee, Hannah Perry, Aubrey Hall, Natalie Suoy, Jessica Camp and Tori Hampton representing BCMS as Cyber Reporters.  They were to interview and create a feature article about the events taking place at WKU.

Up next for the program was the Technology Fair at BCMS on December 12th.  There were 13 categories the students competed in with the top two in each advancing to the Winter Virtual Judging in January.

The top two pieces in each category can be viewed on the school’s website.  During the Winter Virtual Judging, judges view pieces online and select the top eight to 10 in each category to advance to the STLP State Competition.

At the STLP State Competition in Lexington, KY on March 28th, the following students received recognition:

It was very rewarding especially since four of the five categories were our first time competing in at the state level.  Also receiving the Beth Henderson Award was Ms. Sherlyn Bratcher, BCMS STLP Co-Sponsor.   This award is presented to STLP Coordinators who have shown extra effort with guiding the school’s STLP group.

We also had three students who worked on many projects not for competition but because they had a desire to help others - Hannah McClelland, Mikayla Iler and Hannah Perry.  They ran a collection drive for the Teens for Jeans campaign for Aeropostale to provide jeans for teens who can't afford them.  They also raised money by having bake sales and coin drives for the Wounded Warrior Project.

There are so many people to thank for the success of our program this year.  First, thank you to those at the BC Board of Education including Mr. Scott Howard, Superintendent, and Mr. Jimmy Arnold, CIO, for their continued support and assistance. Also thank the board for recognizing the students at the BC Board Meeting Tuesday, April 16th for all of their hard work and accomplishments. Second, thank you to the BCMS Administration for always working with the sponsors and students, and encouraging the students to complete their projects while meeting high standards.  Third, thanks to the BCMS faculty and staff for working with the STLP Sponsors and students to allow them time to work on project, present in your classrooms and inspiring the students to achieve at the highest levels.  Finally, thank you to all of the co-sponsors – Mrs. Latisha Cardwell, Mrs. Anita Cardwell, Mrs. Carla Scott, Mrs. Pam Fazel, Mrs. Amy Smith-Thomas and Ms. Sherlyn Bratcher for working with the students both during school and after, providing feedback and assisting where needed.