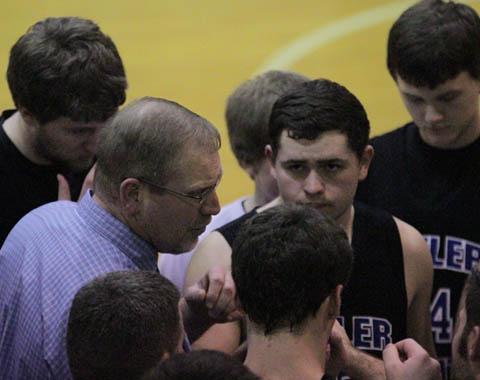 Butler County got back on the winning track last night with a 82-65 win over Frederick Fraize High School (Cloverport).  It was Senior Night as the Bears recognized Drew Henderson, Zeke Woodcock, and Trevor Jenkins at their last regular season home game.  Butler County took control of the game early and never looked back en route to the big win.

February has been a tough month for Butler County as the Bears dropped games down the stretch to Edmonson County, Breckinridge County, and Muhlenberg County.

The weather finally broke enough on Saturday, February 8th, for the Butler County Bears to get back to action in the 2013-14 basketball season. The Bears were trying to recover from a two-game losing streak, and a layoff where they managed to play only two games in a 14 day stretch thanks to wintry weather.  The opponent for the Saturday afternoon game was the Wildcats of Edmonson County. Because the Bears had lost the weekend before to district rival Grayson County the game became a crucial matchup.

Butler County jumped out to a seven-point lead in the first quarter, behind the strong play of Zeke Woodcock and Trevor Jenkins. However Jenkins found himself in foul trouble early, and had to go to the bench. With the Bears’ big man on the bench the Wildcats fought back and trailed only 11-8 after the first quarter.

With Jenkins on the bench the Wildcats continued their comeback. Although the Wildcats only play an 8-man rotation, Coach Darrell Travis was able to keep his players out of foul trouble, and his team outscored the Bears 12-11 in the second quarter. The Bears went to the locker room at halftime ahead by only two points at 22-20.

Butler County sprinted ahead of the Wildcats again to open the second half, but Dakota Woodcock and Michael Poteet started shooting Edmonson County back into the game. The duo combined to hit 4 three-pointers in the third quarter, and going to the fourth the Bears and Wildcats were tied at 42-42.

Jenkins, Zeke Woodcock, and Zak Burden continued to pace the Bears in the fourth period, as the teams swapped leads. A rash of fouls saw Jenkins foul out late in the game, and kept both teams on the free-throw line. Butler County hit on 6 out of 8 from the line, with Edmonson hitting 9-15.

After a pair of free throws tied the game, Butler County had time for one more shot. Zeke Woodcock tried to be a hero once again for the Bears, but his last-second jumper fell short and the teams headed to overtime tied 59-59.
Edmonson County struck first in the extra period, but Butler County’s Woodcock managed to answer. Edmonson County took advantage of Butler County fouls to extend their lead, but each time BCHS would answer. Finally, with less than 15 seconds to go in overtime, sophomore Austin Sowders hit the biggest shot of the game, when he backed in on the Bear defense to hit a twisting, contested layup.
Coach Calvin Dockery called timeout to set up one last play for the Bears. As expected the coach turned to Zeke Woodcock to try and answer the Sowders heroics. Zac Burden inbounded the ball to Woodcock, who loped up court with less than seven seconds to go. Woodcock slipped off a soft screen, and pulled up from the top of the key for a three-pointer to win, but the shot was offline. The horn sounded to cut the Bears’ comeback short, and they fell to their 3rd straight loss by a final of 67-65.

Zeke Woodcock led the scoring for Butler County with 24 points, with Trevor Jenkins adding 16 for the Bears. The rest of the Bulter County scoring was; Burden-8, Payton-6, Deweese-5, D. Henderson-4, Graham-2.

**
With the memories of the Edmonson County loss still fresh in their minds the Bears had to suit back up on Tuesday night for a game with Breckinridge County. The night was also Bearfest at Butler County High School. In pregame ceremonies Bears’ senior Trevor Jenkins was crowned Bearfest King, with his girlfriend, Lydia Murphy, winning the queen’s crown.

Once the game started the Tigers had little respect for the newly crowned BCHS royalty. The Tigers connected on 6 three-point baskets in the first half, to pull away to a 7 point lead at halftime. The Bears found themselves unable to finish near the basket, and also had a poor shooting night. For the game the Bears managed to hit on only 26 out 81 shots, for a 33% shooting effort. Adding to that the Tigers kept going to the free-throw line and hitting. The Tigers shot 28-36 from the line, and pulled away from the Bears in the second half. When the dust settle the Tigers had spoiled Bearfest by a final score of 80-65. The win was only the fifth for the Tigers. The fourth straight loss for the Bears dropped them to 11-8 on the season.

On the night before Valentine’s Day the Bears hit the road to try and break their losing streak with a matchup against the Mustangs of Muhlenberg County High School.

The Bears shooting woes struck again against the Mustangs. After starting the game well, the Bears stayed with the Mustangs in the first quarter. After the first the teams were tied at 12, but failure to finish close to the rim once again hurt the Bears chances. Behind a strong first half for Hunter Noffsinger with 11 points, the Mustangs took a 36-26 lead into the locker room at halftime.

The cold hands of the Bears didn’t warm up in the second half, and the fouls started to mount. Caleb Deweese fouled out early in the fourth, and the Mustangs took advantage from the free throw stripe. The Tigers hit on 9 out of 14 free throws. The Mustangs also hit 27 out of 60 from the field on their way to a 74-48 win. The loss dropped BCHS to 11-9, and the losing streak grew to 5 straight games.

Butler County (12-10) will play Edmonson County next week in 12th District Tournament action set to begin next week in Morgantown.  Be sure to check back with BTN for a tournament preview.