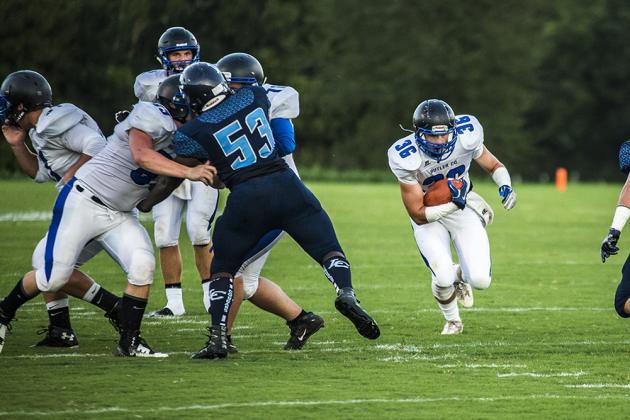 The Butler County High School Bears opened the 2016 season on the road at Logan County High School.  The Cougars, with new enthusiasm and a new head coach, had plans to end the streak - meaning the Logan County football losing streak dating back to September of 2013. The Bears had no intention of allowing themselves to be the headline of that streak as Butler County came away with a strong 53-14 win.

The Bears' opening drive of the game went four plays and out but the Bears defense responded immediately. The Cougars' very first offensive play of the season resulted in an interception by defensive back Blake Graham. The Bears would take advantage of the turnover and six plays later quarterback Rex Henderson hit Dillon Brosnan for a five-yard touchdown pass; the extra point kick was good by Logan Richardson. The Bears led 7-0 with 7:51 in the first quarter of play. The Cougars second possession was three plays and punt.  Butler County put together another six-play drive with Henderson on a quarterback sneak from three yards out for the touchdown. Richardson's kick was good - 14-0 Bears with 3:54 left in first quarter.

Logan County then responded with a nine-play drive for a touchdown; the kick good and with 11:05 in the second quarter to make the score 14-7 Bears. Butler County stormed right back on the next possession with a thirty yard pass from Henderson to Graham but the drive stalled out in the "red zone" on the eighteen-yard line.  The Cougars took over on downs but four plays later punted right back to the Bears.  The Bears' fifth possession of the night was a well-executed drive going ten plays with a Henderson to Brenden Shanklin eighteen-yard touchdown pass.  The kick was no good. The score with 5:05 left in the first half of play was 20-7.

The Cougar quarterback, a true freshman, had a very tough night as the Bears' defense constantly forced early throws and incompletions, along with interceptions. The Bears blitz packages came from Caleb Hunt, Dalton Lee, Ty Smith, and Issac Flener.  The Cougar quarterback was intercepted on the next play by Shanklin.  With a short field, it took the Bears only two plays to find the end zone again. Henderson, on a QB-three-yard jog for the touchdown.  The two-point conversion pass was incomplete, making the score 26-7 with 4:15 left in the first half.  The Bears would add one more score before the half as Henderson scored again on a three-yard run.  The Richardson kick good to give the Bears a 33-7 lead with 1:05 remaining in the half.  On the last play of the half, defensive lineman Issac Flener sacked the Cougar quarterback.

The second half of football was more of the same as the Bears took the opening drive of the third quarter taking only four plays to score. Butler scored on a Henderson to Graham pass for the eight-yard touchdown; the Richardson kick was good to give the Bears a 40-7 lead with 7:56 left in the third quarter.  Down by 33 points, the Cougars continued to air it out and continued to throw the football. Ty Smith and Caleb Hunt both had quarterback sacks on this drive and on the sixth play of the Cougar drive Gage Ward intercepted the pass to kill the drive.

Taking advantage of each turnover, the Bears continued to roll eight plays later with a Henderson to Shanklin twenty-five yard touchdown pass; the kick was good to make the score 46-7 with 1:06 left in the third. At this point, by KHSAA rule when the margin reaches 35 or more points, a running clock went into effect the remainder of the game.

The Cougars were plagued by turnovers the remainder of the night.  In the second half, all four possessions would end in turnovers: interception, interception, interception, and lost fumble. Shanklin and Henderson snagged picks four and five on the night, while sophomore Logan Binion caused and recovered the fumble.  The final Bears score of the night was a one-yard run by Caleb Hunt; the kick good score 53-7 Bears with 10:26 left to play in the game. Logan County would get on the board again making the final 53-14 Bears.

Butler County's defense proved to be very tough the entire night as the Cougars could only manage a total of 113 yards total offense on the night. The Cougar run game was completely held in check for a net gain of only four yards rushing. The Bears defense of Brosnan, Hunt, Flener, Henderson, Graham, Shanklin, Ward, Richardson, Warren Cameron, and Ty Smith played fast with gang tackling and getting plenty of hats to the ball.

The Bears go to 1-0 on the season and will play its home opener on Friday, August 26th against the Edmonson County Wildcats. Kickoff is set for 7 p.m. This and all Butler County Bears football games will be aired live on The New Q - WLBQ 101.5.  John Embry will have the play-by-play; Cody Donaldson will provide real-time stats and behind-the-scenes team information; and Josh Scott will be on color commentary.

Below are team and individual stats for the Logan County game: