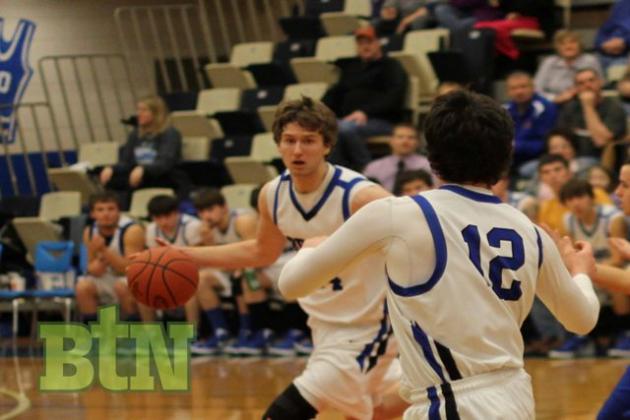 First up were the Bears and Raiders. The Raiders are led by Luke Johnson and Skyler Dickens, and had already fell twice to the Bears this season. From the opening tip it was clear that the BCHS boys were not going to allow the Raiders to pull the upset. The Raiders tied the game up early at 12-12, then the Bears went on a 14-2 run to close the quarter and put the game away. Trevor Jenkins hit three straight three-pointers in the run, and Elijah Flener had 7 points as the Bears took a 26-14 lead after a period of play.

With the game in hand Coach Greg Woodcock went deep down his bench in the second half, mixing young players with his experienced starters. This was needed as Lucas Bratcher and Brandon Thomas both fouled out of the game in the third period. The game was a free-throw shooting festival for both teams. Referees called 48 personal fouls in the game and each team shot 32 free throws. As a result the game lasted approximately 35 minutes longer than a normal high school game. Beech Tree Radio Color Commentator Diane Dyer quipped late in the game, “The fouls have slowed down, but I think it’s because the officials are winded and want the game to be over.”

Butler County didn’t ease up on the Raiders in the second half. The Bears allowed the Raiders to score only three points in the third period, outscoring them 11-3 in the third period. With a mixed team of varsity reserves in the fourth period the Raiders were able to win the fourth period 21-17, but by then the game was already out of reach. One of the biggest cheers of the night came with under 2 minutes to play in the game when junior Alex Hudnall hit a long three off the left wing for BCHS. On the night the young Bears Alex Hudnall, Matt Moore, and Drew Henderson all played significant minutes and cracked the scoring column. Henderson led the reserves with 4 points.

In the end BCHS was just too much for the Raiders. Jenkins finished with 5 three-pointers and 26 points, and Elijah Flener added 22 points and 16 rebounds to lead BCHS to a 76-56 win.

BCHS opened up strong and aggressive on the Lady Raiders. Katie Graham, Cheyenne White, and Madeline Drake combined for 15 points to open the first period. White nailed a three from the corner to get the crowd into the game with just over a minute gone in the game, and from that point the romp was on for the Lady Bears. BCHS led 16-5 after the opening quarter.

The Lady Bears continued to dominate the smaller Lady Raiders in the second period. Good BCHS defense forced multiple turnovers for Trinity and the Lady Bears took advantage. The Lady Bears had 7 points off turnovers in the period and took a 30-8 lead into halftime. Madeline Drake returned from a mild concussion to lead the Lady Bears with 11 points in the first half.

The second half was low scoring as both coaches made the most of the chance to rest some starters and use their benches. Every healthy Lady Bear made an appearance in the second half, but it was two starters--Graham and Drake--that led the way. Drake finished the game with what Coach Christy Clark called later a “quiet” 20 points and Katie Graham added 14 for BCHS as the Lady Bears got a much-needed 48-26 win over the Lady Raiders.

After the game Coach Clark praised all her players. “This year has been tough, but I’ve had young girls step up and I’m really starting to see improvement.”

The Lady Bears will play at home Tuesday night vs. Allen County/Scotsville. Tip time for Varsity will be 7:30 with coverage beginning on Beechtree Radio at 7:20 p.m.