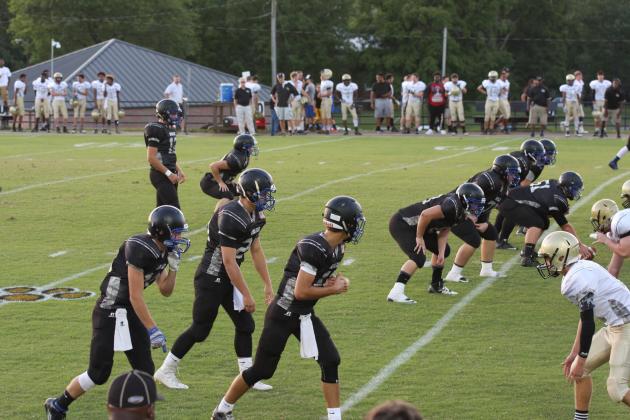 Butler County, on Friday night, came up short in its upset bid against the Russellville Panthers, 50-42.  The Bears slip to a 2-1 overall record in the early part of the season. The overflow crowd at Rhea Stadium was treated to an offensive showcase by both teams. The Class A Panthers are ranked #2 in the state and look to make a run deep into the playoffs this November with an abundance of team speed.

The Panthers scored on the opening drive of the game and took the lead 7-0 with 9:27 in the first quarter of play. The Bears responded driving 69 yards in seven plays.  Quarterback Rex Henderson scored on a nine-yard sprint to the end zone; the Logan Richardson kick was good making the score 7-7 with 6:53 left in the first quarter of play.  Russellville’s trademark is running the football and on the second possession went 55 yards in eight plays. All eight plays were runs - a ten-yard sprint around end by senior quarterback McMurray.  The kick was good to make the score Panthers 14-7 with 4:01 left in the first.

On Butler's next possession, the Bears would go three plays and punt, giving the ball right back to the Panthers. The Panthers, from the 44-yard line, would take only four plays to find the end zone again to make the score 21-7 with 0:40 seconds left in the first. The Bears' fourth possession would be short lived as they managed only three plays into the drive and fumbled the ball back to the Panthers.  The Panthers could not respond and the Bears' defense would hold, forcing a punt. Butler County went to the air on the next possession; a key play in the drive was a pass/catch from Henderson to Blake Graham for a 43-yard gain. Two plays later a pass/catch from Henderson to Dalton Havens was good for the touchdown.  The Richardson kick was good with the Bears trailing 21-14 with 11:14 left to play in the half.

The Panthers on their fifth possession of the night drove 73 yards in eight plays to cushion the lead 27-14 with only 2:58 to play in the first half of play. The Bears can strike quickly and it would take them only two plays with a Henderson to Gage Ward pass/catch for a 67-yard touchdown score. The kick failed and the score going into the locker room at halftime was 27-20 Russellville.

On the opening play of the third quarter the Bears would fumble after a gain of seven yards on a screen pass. The Panthers took advantage of the mistake and seven plays later on seven run plays the score read 34-20 with 8:47 left in the third quarter. The Bears' next possession would go four plays and punt, giving the ball back to the Panthers. The Panthers continued to run the football and went 55 yards in six plays for the score.  The two-point conversion run was good. The score was now 42-20 Panthers with 4:17 left in the third.

The Bears at that point mishandled the kickoff found them backed up on the eight yard line; but would put a 92 yard, nine play drive. Henderson would run for the score from five yards out, the two point conversion pass failed the score 42-26 with 0:32 seconds left in the third. The Panthers would fumble away the next possession; the Bears seizing the momentum would take only two pass plays with catches by Graham & Ward. QB Henderson found Ward deep down the middle of the field for a 43 yard pass/catch touchdown. The two point run conversion by Henderson good, score now 42-34 with 9:38 left to play in the game.

The Panthers would respond on the next possession, driving 55 yards in nine plays - another drive consisting of all run plays. The score came on another quarterback McMurray run from eleven yards out.  The two-point conversion run was good. The Panthers now led 50-34 with 4:07 left to play. The Bears again responded with a eleven play, 65-yard drive; Henderson would score from one-yard out and the conversion two-point run was good.  The score was now 50-42 with only 2:12 left to play in the game.

A perfect onside kick by the Bears for a second looked to be in the arms of Blake Graham, but seconds later the Panthers were given possession and ran out the clock to end the game.

The Bears fell to 2-1 overall, while the Panthers moved to 3-0. Here is a look inside the numbers from the game with individual stats: