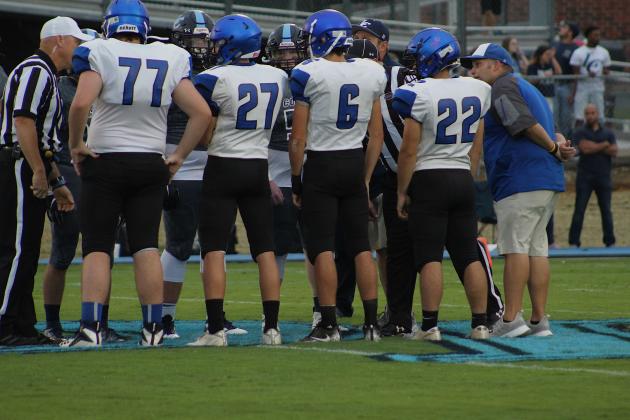 The Butler County High School football Bears saw a close first quarter slip away on Friday night en route to a 55-20 loss to Logan County in Russellville.  The Bears trailed 7-0 with only a little over a minute remaining in the first quarter when the Cougars broke for two touchdowns - one a 63-yard run by quarterback Tyler Ezell and the other a result of an onside kick.  Logan’s first touchdown of the game also resulted from an onside kick on the opening kickoff.

Trailing 21-0 in the second quarter, Butler County got on the board at the 11:46 mark on a pass to receiver Bryar Beasley, who completed the 90-yard touchdown play.  Logan added two touchdowns in the second quarter to take a 44-6 halftime lead. The Cougars put the game away in the third quarter with 21 unanswered points.

Nevertheless, Butler County battled throughout the game and found the end zone twice in the final quarter - a 37-yard pass pass from Henderson to Beasley and a 5-yard run by Henderson.  Henderson connected with receiver Solomon Flener for the two-point conversion on the first touchdown; a PAT attempt failed on the second one.

Sophomore quarterback Jagger Henderson was 13 for 27 for 274 total passing yards with two touchdowns and one interception.

Receivers Bryar Beasley and Solomon Flener led the way with 179 and 85 yards, respectively.

The Bears had 11 first downs (Logan/23) and were 4 for 11 in third conversion attempts.

"I was pleased with the way the team fought until the final horn.  They continued to work even when things went negatively," said head coach Brandon Embry.  "The passing game looked good most of the game."

Looking ahead to this week, Coach Embry has targeted the run game and tackling for improvement.

"We have to get the run game more effective.  Defensively we have to improve on tackling in the open field and tackling lower," said Embry.