Bears escape with 35-28 win over Edmonson 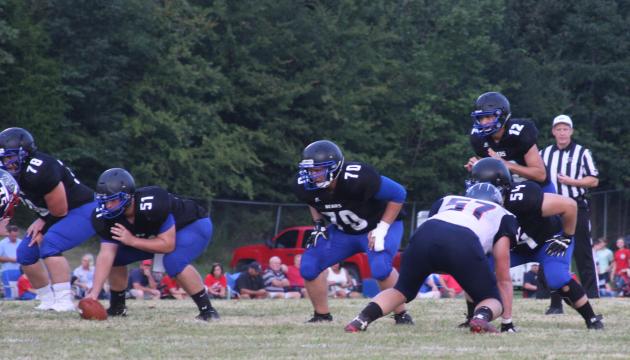 The home opener was everything a football fan could ask for as Butler County and Edmonson County battled back and forth throughout the night. An overflow crowd battling the humid August night saw the Bears trail virtually the entire game as the visiting Wildcats executed a flawless game plan of ball control running attack to shorten the game and keep the Bears' offense off the field.

The Bears opening drive was textbook, driving twelve plays down the field to the fifteen-yard line.  After three incomplete passes, the fourth down pass was an apparent touchdown but the Bears' receiver could not secure the catch. Butler County would never touch the ball again in the first quarter of play.

The Wildcats, on their opening possession, put together a sixteen-play drive and punched in the first score of the night from four yards out for the touchdown; the kick was no good. Edmonson County led 6-0 with 11:55 remaining in the second quarter of play.

The Bears would respond now trailing.  Their next possession drive resulted in fifty-nine yards in only seven plays and included a mix of run/pass as junior running back Houston Hampton ripped off back-to-back runs of fourteen and thirteen yards.  Junior wide-out Dalton Havens snagged a pass for fourteen yards. From the eight-yard line senior quarterback Rex Henderson found a wide open Ty Smith out of the backfield for the touchdown pass/catch. The Logan Richardson kick was good; the Bears led 7-6 with 9:49 to go in the second quarter of play.

The Wildcats answered on a six-play touchdown drive.  The Edmonson quarterback sprinted fifteen yards to the end zone to retake the lead 12-7 with 7:14 left to play in the first half. The Wildcats went for the two-point conversion pass that fell incomplete. The Bears and Wildcats would both swap punts on their next possessions. But on the Wildcat punt, with only 3:28 left to play in the half, return man Brendan Shanklin fielded the punt and raced seventy-five yards for the touchdown. Richardson's kick good; Bears took the lead back 14-12.

Edmonson then put workhorse running back #22 Daniel Caudill to work as the senior would rush for seven of the eight-play drive and score from two yards out; the kick was good and the underdog Wildcats took a 20-14 lead to the locker room at halftime. Caudill, in the first half alone, had twenty-two carries for one hundred and thirty-nine yards and two rushing touchdowns.

In third quarter of play, the Wildcats would stick to the script of running the ball and eating the clock.  Edmonson, inside the five-yard line looked to score on its opening drive but Caudill fumbled before hitting the goal line was it recovered by Warren Cameron for a touchback. The Bears had ball at the twenty-yard line. Butler County was held in check on its first possession of the third quarter and went three plays and punted right back to the Wildcats. The Bears' defense stiffened at midfield and instead of punting on fourth down, the Wildcats gambled and went for it on fourth-and-two. The runner was hit behind the line the Bears took over at midfield with great field position.

On the very next play, quarterback Henderson bolted fifty yards right up the middle for the touchdown, the kick was good. The Bears now led 21-20 with 3:53 left in the third quarter. Two plays later, the Wildcats went to the air and connected for an eighty-yard touchdown pass.  The two-point run conversion was good.  The Wildcats retook the lead 28-21 with 2:58 to go in the third.

The Bears' next possession returned fire with an eleven-play drive covering fifty-five yards. A heavy dose of Bears' running was included in this drive, mixing it well with carries by Hampton, Brosnan, Smith and Henderson. But the touchdown would be a Henderson to Shanklin catch pass from ten yards out.  The kick failed and the Bears trailed 28-27 with 11:43 left to play.

With momentum growing, the Bears' defense forced the Wildcats to go four plays and punt. The Bears' offense then put together a textbook game-winning drive that would cover eighty-five yards in seventeen plays. Mixing the run/pass plays well, the game winning touchdown pass would be Henderson to Shanklin from only six-yards out. The two-point conversion pass was also Henderson to Shanklin. The score now read 35-28 with only 3:35 left to play in the game.  The Bears' defense held and would force the Wildcats to throw two interceptions on their next two possessions.  Both picks/interceptions were snagged by Warren Cameron. The Bears ran out the clock to preserve the come-from-behind win at home.

Listed below is a recap of individual stats both offensively and defensively for the Bears as they move to 2-0 on the season.