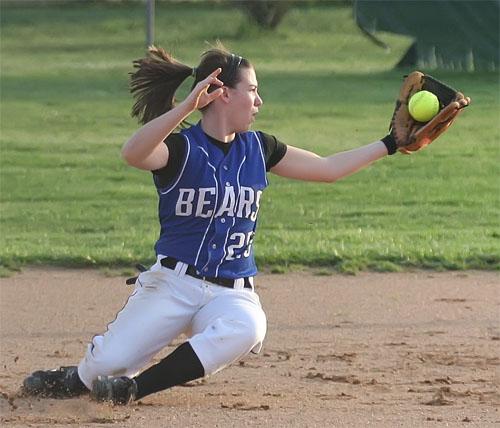 Butler County (1-1) found itself on the wrong side of the score on Monday night at Muhlenberg County in prep softball action.  In the varsity game, Butler County's bats were outmanned by Mustang pitcher Nikki Peveler as the Bears fell 7-0.

In the junior varsity game, defensive woes proved to be the difference in the game as Butler County errors contributed significantly to a 10-2 loss.

The Mustangs plated three runs in the second, three more in the third and another in the 5th for the 7-0 varsity win in an 11-hit outing.

Junior pitcher Morgan Manning pitched all seven innings and allowed 11 hits and five earned runs.  She struck out two batters, walked one and hit one.

8th grade centerfielder Naomi Cade went 3-for-3 in the JV game.  Abigail Fry and Alex Embry each had a RBI.

On Tuesday night Butler County suffered a disappointing loss on the road at Owensboro, 7-4.  The JV Bears fell 8-4.

Butler County actually got more hits than their counterparts but wasn't able to get them at the most opportune times.  Also, two errors in the fifth inning, when the Bears were ahead, contributed to a 5-run inning for the home team.

Leading the way offensively for Butler County was Natoshia White with two singles and three RBI, including a two-run homer in the top of the fifth inning.   Morgan Manning, Emily Rich, and Katie Graham all doubled, while Madeline Drake and Amy Rogers added singles.  Rich's double came in her first varsity pinch hit opportunity.

The JV was almost a repeat of the varsity game.  Butler County out-hit Owensboro 7 to 6 but poor defense proved to be the difference.

The Bears were paced offensive by 8th grade center-fielder Naomi Cade who went 2 for 4 and reached base in every at bat.  Abigail Fry, Alex Embry, Emily Rich, Allie Howard, and Callie Cardwell all singled.  Cade, Rich, Candace Ibarra, and Sarah Johnson each had a RBI.

"We're simply not playing very good softball right now," said BCHS head coach John Embry.  "In both the Muhlenberg and Owensboro games, we did some things well but  have been wildly inconsistent in our execution of basic fundamentals.  We are a better team than what we have shown in the last two outings but we're currently not performing very well.  We've got to do better."