Bears come up short at McLean; focus now turns to Hancock on Friday 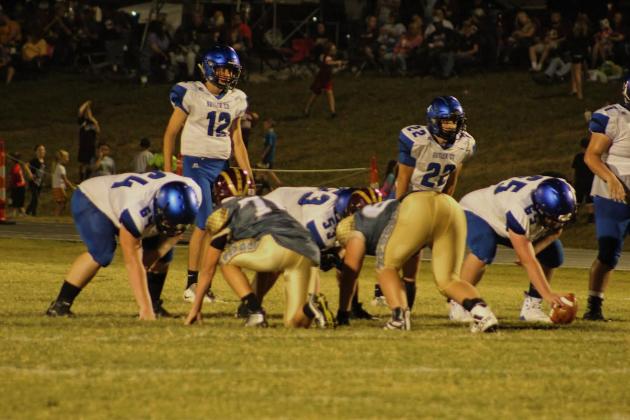 Despite an early 8-7 first quarter lead on Friday night, Butler County struggled to stop McLean County’s strong running game, losing 55-32 on the road at Calhoun.
Both teams scored quicky - McLean on three plays at 10:57 in the first quarter and Butler on a 1-yard run by Josh Morris and a Zak Silcox conversion.  The Cougars then rattled off three consecutive touchdowns to take a 28-8 lead with 4:15 remaining in the second quarter.

With 1:32 remaining in the half, Jordan Todd grabbe a McLean fumble, who took it into the end zone.  Henderson connected with Solomon Flener for the conversion. McLean added a late score to take a 36-16 halftime lead.

Butler County battled in the second half with touchdowns by a Henderson run 5-yards out and later on a 29-yard pass from Henderson to Flener.
Trailing 48-22, McLean scored again from the 3-yard line with 10 seconds remaining in the game to make the final score 55-32.

“Overall we competed well against McLean.  It's a learning process still at the varsity level. We have to find a way to compete for four quarters because the last two weeks we have dug ourselves a whole in the 2nd quarter.  I liked how we fought to stay in the game after the 2nd quarter though,” said BCHS head coach Brandon Embry.

Butler County managed 259 yards of total offense (McLean 546) on 52 plays - 137 passing yards and 122 yards rushing.  Quarterback Jagger Henderson was 10 of 23 with one touchdown and three interceptions. Receiver Solomon Flener had 65 receiving yards and Brody Hunt finished with 22 to lead the Bears.  Running back Austin Mahaney ran for 59 yards to lead the team in that category. Zak Silcox had two punts for 96 yards.

Coach Embry believes defense will be the key to his team’s success against Hancock.

“Hancock County runs the flex bone veer.  To be successful against the veer we have to play team defense and defend our individual assignments,” said Embry.  “Their quarterback does a good job of reading the defense and getting the ball where it needs to be. Offensively, we must match their intensity, their linebackers flow hard to the ball.”