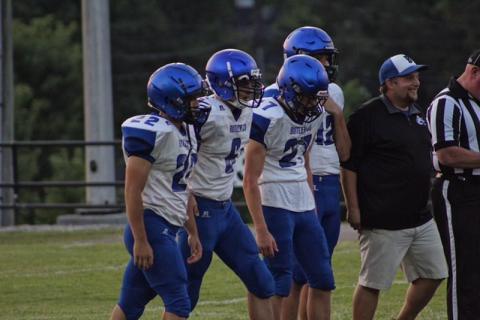 A scoreless first quarter gave way to second quarter that saw both teams reach the end zone.   Jovari Gamble converted a four-yard run at the 7:38 mark in the second quarter to give Russellville a 7-0 lead following the extra-point kick.

The first half ended with Russellville holding on to a slim 7-6 lead.

In the third quarter, Panther quarterback Lennon Ries (son of former BCMS football coach Pete Ries) connected with receiver Jovari Gamble for a 67-yard touchdown at the 7-minute mark. The two-point conversion gave Russellville a 15-6 lead and that’s where the game stood heading into the final quarter.

With 10:06 remaining in the game, the Bears’ offense found its stride as Henderson found receiver Solomon Flener for a 17-yard touchdown.  Despite a failed two-point conversion attempt, Butler County had still closed the gap to a manageable 15-12 margin.

Butler County’s defense proved solid throughout the fourth quarter and was able to stop Russellville’s offense on multiple possessions.  Finally, with 3:08 remaining, running back Josh Morris broke free from a pack of players and ran 41 yards for the touchdown. The Henderson to Flener two point conversion pass was good to give the Bears their first lead of the night at 20-15.
Butler County also recovered the ball on the ensuing kick-off but Russellville managed to retain possession.  The Panthers drove into Butler County territory and had opportunities to score but were turned away on downs by a strong Butler County defensive squad that stepped up to secure the win.  The Bears took over and held on for the 20-15 win.

Butler County had 285 yards of total offense compared to 240 yard for Russellville.  Henderson was 9 for 14 for 145 yards with two touchdowns and no interceptions. Ries for 4 for 18 with 100 yards and one touchdown.

Butler County had 4 penalties for 30 yards; Russellville had 8 for 40 yards.

Butler County was 5 for 13 in third down conversion attempts and 2 for 3 in fourth down attempts.

Ethan Lawrence led the Bears in rushing yards with 64.  Josh Morris had 56 yards and one touchdown. Solomon Flener recorded 71 yards in the air and Bryar Beasley had 68 yards.

BCHS Head Coach was proud of his team’s performance in securing the win.

“In the win on Friday we were able to limit their big plays.  We knew coming in they would be able to score on any given play due to their athletic ability but we had to limit them,” said Embry.  “We made them drive the ball to score outside of the one big play.”

The coach said conditioning and managing the clock were also important factors.

“Offensively we were able to control the clock with the run game.  Conditioning was a big factor as the game wore on because of the style of play we forced them into with our offense.  Our pass game made big plays when we needed it, providing us with a balanced attack,” said Embry.

The win was the first for Embry as head coach and one that was an important step in continuing to rebuild the BCHS football program.

“This win is huge for our program.  Not only does it break the losing streak that has been hanging over our heads but it was against an opponent we haven't defeated since 1991,” said Embry.  “The kids and coaching staff have worked hard to get back to our winning ways. I hope this brings a positive vibe to our program and we can continue building on this win and get several more this season.”

Butler County (1-2) will come home for the first time this season with a game on Friday night against Hart County (2-1).

“Hart County will primarily attack us with the run from their Wing-T offense.  They do have the ability to hurt us with the play-action pass. They will spread the ball out to several good athletes in the run game using misdirection,” said Embry.  Defensively they have shown a 3-4 defense early in the year followed by a couple of games in a 40-front. They attack down hill aggressively with their inside linebackers bringing multiple pressures.”