Bears beat Hopkins and Todd, before falling to Daviess 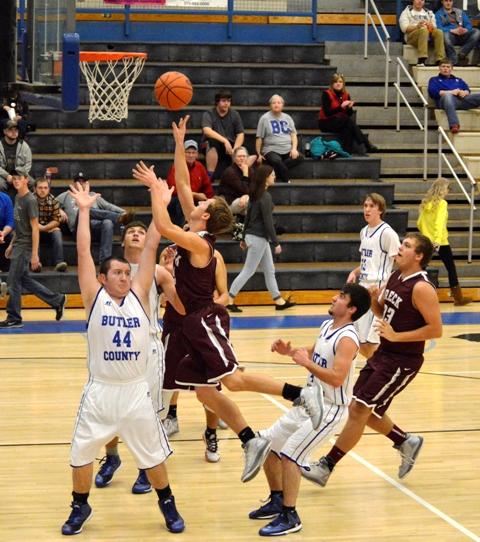 Butler County's latest three-game set saw the Bears go 2-1 with wins over Hopkins County Central (76-70) and Todd County Central (85-76) before suffering a 88-61 defeat to Daviess County.  Through six games the Bears are 3-3 on the young season.
On Friday, December 12, Butler County placed four players in double figures with senior guard Zack Burden leading the way with 28 points as the Bears defeated Hopkins County Central 76-70 in the Messenger Tip-Off Classic.  Baylee Anderson had 17 points, Caleb Deweese added 14 points, and Rex Henderson pitched in 10 points.  Although the Bears struggled in the third quarter, a 21-6 first quarter advantage and 27-25 fourth quarter advantage proved to be enough for the win.
Butler County was 19 for 28 from the free throw line.

"Hopkins County Central was a very solid win on the road," said Butler County Head Coach Calvin Dockery.  "We had to battle a lot of adversity including foul trouble and managed to come out with a win."

It was the Burden-Anderson Show in Morgantown on Monday night, December 15, as Zack Burden exploded for 33 points and Baylee Anderson was close on his heels with 29 points as the Bears defeated visiting Todd County Central, 85-76.  However, the Bears found themselves in a halftime hole, 40-32, after a disastrous second quarter, which they lost 25-15.  Butler County turned it around in the third as Anderson got hot with four three-pointers and 23 points himself.  A big fourth quarter for Burden - 16 points total - sealed the deal for Butler County.
"Todd came out and played very hard - the best game they had played up to that point.  They were very athletic and knocked down some perimeter shots as well," said Dockery.  "We were fortunate to come out with the victory.  It definitely wasn’t our best game, but we did find a way to get it done."

Butler County ran into a strong Third Region opponent on Tuesday night, December 16, in Daviess County and fell 88-61 despite strong offensive performances by Zack Burden and Baylee Anderson with 28 points and 21 points, respectively.
The opening quarter proved to be the decisively one as the Panthers raced out to a 30-11 advantage.  Daviess built on that lead in the second to take a 57-31 lead at halftime. It wouldn't get much better in the fourth as the Panthers held on for the 88-61 win.
"Daviess is a very good team.  They have everything you need to be successful.  I was impressed with their athleticism and the their big guy Currie is a total player.  At 6’7” he can handle, shoot the fade away, knock down the three, and rebound well," said Dockery.  "The most important thing that our guys did was continue to play hard.  They did not stop playing and that’s all anybody can ask."

* * *
Butler County (3-3) will be back in action this weekedn in the Hoopin' It Up Classic at Adair County.  The Bears will play Bethlehem at 3 p.m.  On Monday, December 22, Butler will travel to Allen County-Scottsville to face the Patriots at 2:30 p.m.