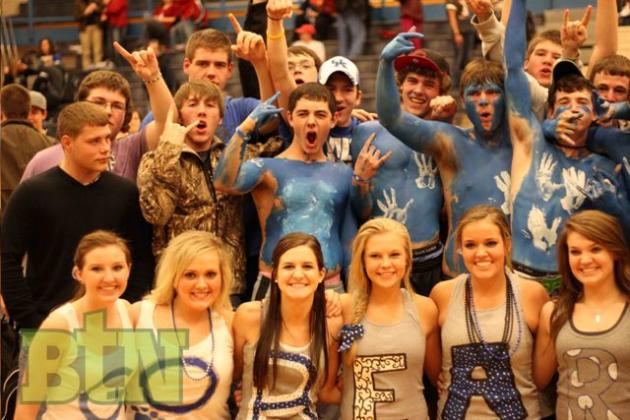 The final regular season district games for the BCHS basketball teams were Friday night in Morgantown. The Wildcats and Lady Cats from Edmonson County rode into town to face the Bears and Lady Bears from BCHS. The games would be the third meetings for the teams this season. (Please note: Half time scoring was given for the Lady Bears in video, final scoring was: West-14, White-6, Drake-5, Flener-4, Turner-4, Easley-2, Graham-1)

First up were the ladies. BCHS and ECHS split a pair of games earlier in the season with ECHS winning in their home gym 46-25, and BCHS won 50-48 in the opening round of the All ‘A’ Tournament at McLean County High School. On Friday night the Lady Cats, back at full strength for the first time since early in the season, seemed determined to avenge the All ‘A’ loss. ECHS scored first and Madison Rich had ten points in the game’s opening five minutes. The Lady Cats opened on a 12-3 run on the way to a 18-9 lead after the first quarter.  Coach Christy Clark adjusted her defense and put Madeline Drake as a chaser on Madison Rich. The switch worked and BCHS also settled into their offense. With no player scoring more than four in the quarter the Lady Bears outscored and outhustled the Lady Cats on the way to a 14-8 win for the quarter. Madeline Drake punctuated a furious quarter for the Lady Bears with a three-point goal that popped the nets with the buzzer sounding. At halftime the Lady Cats led by just three at 26-23.

The third quarter was a back and forth battle, with ECHS scoring close to the rim and BCHS living from beyond the three-point arch. Shawna West had her best night as a Lady Bear on Friday, connecting on 3 out of 8 three-pointers on the way to 14 points on the night. In the third period West hit two threes to keep the Lady Bears in the game going to the final period. After three quarters the Lady Cats led 37-31.

ECHS lived at the free throw line in the fourth period hitting on 8 out of 10 free throws. The Lady Bears offense sputtered in the final period as the outside shooting cooled, and Edmonson County’s rebounders limited BCHS to one shot on possession after possession. The Lady Bears managed only five points in the period and the Lady Cats pulled away to grab a 49-36 win.

The chasing defense limited Madison Rich to only 8 points after the first quarter, but she still led all scorers with 22 points in the game. Hannah Clemmons added 12 for the Lady Cats. BCHS was led in scoring by West with 14.

The boys from the rival schools took the floor next. Butler County has won both meetings between the schools this year. The Bears won 59-47 at ECHS and 50-41 in the All ‘A’ Classic at McLean County.

The Bears dominated the first quarter, sending the BCHS student section into a frenzy. Trevor Jenkins had five points for the Bears in the opening period as neither team could produce much offensively. At the close of the period BCHS had stymied the Wildcats and was up 9-2. The second quarter saw BCHS extend the lead to as much as 26-12 before the Wildcats started mounting a comeback. The Wildcats reeled off a 8-2 run over the final three minutes of the first half and went to the break down 26-18. Trevor Jenkins led all scorers in the first half with 8 points.

The crowd was still boisterous as the second half started, but ECHS senior Matt Caudill quickly began to quiet the Bear fans. Caudill had 7 in the of ECHS’s nine points in the third quarter as the two teams battled to a 9-9 stalemate for the period. Then ECHS senior Josh Milam opened the final frame with 6 unanswered points to stun the crowd and begin another ECHS comeback. ECHS made the comback complete with under a minute to play when a pair of Chase Duvall free throws--his only points of the game--tied the game at 44-44 with under ten seconds to play. Further adding to Butler’s problems were a pair of key players, Zeke Woodcock and Dylan Goodall, fouled out of the game. Pressed into service were reserves Zac Burden and Alex Hudnall.

Following the Duvall free throw BCHS inbounded the ball and put it into the hands of junior Elijah Flener. Flener was coming off arguably his best game as a Bear on Monday night versus Trinity High School. Flener had 22 points and 16 rebounds in that game. Following the game the junior said that losing his home recently to a house fire had put things in perspective. “Everything you have can be taken away instantly, now I appreciate being able to play and enjoy it and have fun,” said Flener.

Flener took the ball into the teeth of the ECHS defense but was stopped after turning the corner and trying to make a move to the basket along the right baseline. Flener calmly dribbled between his legs, stepped back to make some space, then nailed a 12 foot jumper in the face of two ECHS defenders with 6.1 on the clock to make the score 46-44 in favor of the Bears. Coach Darryl Travis called timeout to set one final play for the Wildcats with 4.1 seconds to play.

The Wildcats came out of the timeout and inbounded to Milam, who gave the ball up to Matt Caudill. Caudill moved the ball up the floor and went to the BCHS left. Caudill, a three point specialist, tried to come off a screen to get an open look at a three from the corner, but Zac Burden fought through the screen. The move forced Caudill to drive past Burden and settle for an off balance, contested jumper from about 15 feet. The shot was no good as the buzzer sounded, and the Bears had survived to win 46-44.

Josh Milam led all scorers in the game with 19 points, Matt Caudill added 13 for ECHS. Trevor Jenkins led the Bears with 11 points. Flener had 9 points including the game winner with 6.1 to play.

After the game sophomore Zeke Woodcock was asked if he was surprised Milam didn’t get the the ball with the game on the line for the Wildcats. “I think they were trying to use him to set up the three for Caudill. It would have been there, but Zac (Burden) fought through the screen and he had to take that shot,” said Woodcock.

District play is over for both BCHS teams until Monday, February 20th when the 12 District Tournament opens at Grayson County High School.

The Butler County High School student cheering section came prepared for Friday night's game.  Some were dressed up for the occasion, others painted their body, and everybody stayed on their feet cheering the Bears to victory.  Thought we would share some picture from last night with our readers.  Complete story and video will be coming soon.