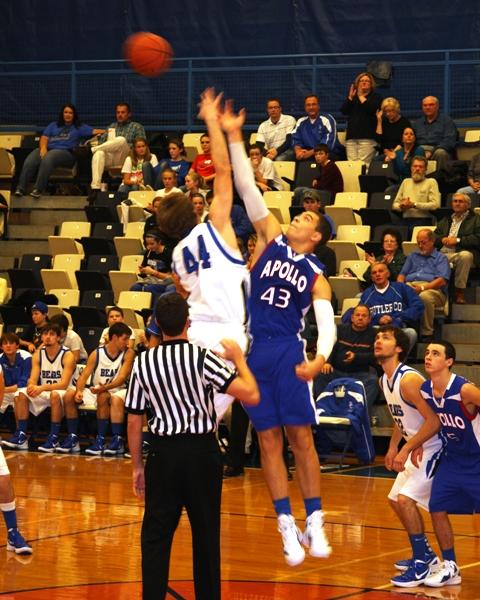 The Butler County Bears opened their 20011-12 basketball season on Tuesday night in Morgantown. They were facing Owensboro Apollo High School, one of the teams coach Greg Woodcock added to the schedule for this season to test his young team against a better caliber opponent. Apollo returns three seniors with starting experience from last year with a mix of size and strength down low and the ability to shoot from the outside. The Eagles came into a rowdy Butler County High School gym, with Mr. Jason Ausbrooks’ band leading the cheers for Butler County and igniting the home crowd with stirring renditions of the National Anthem and the Butler County High fight song.

The Eagles tried to quiet the crowd quickly after the opening tip. Early on it was the strong inside play of forward Michael Berry and center Hunter Biven that gave the Bears problems. The Eagles were able to jump on the Bears early by working the ball down low, while the Bears had trouble executing their offense. Brandon Thomas finally got the Bears going late in the first period when he hit a pair of three-point field goals on successive possessions to slow down streaking Eagles. Elijah Flener added a field goal but the Bears still trailed 16-8 after the first.

The second quarter was hard fought by both teams. Apollo’s Biven and Berry were able to contain Butler County’s Trevor Jenkins down low and managed to rebound on the offensive end of the floor. From the perimeter the Eagles’ Hunter Shelton and Sam Sergeant began to heat up. Shelton hit three long range shots in the second period, while Sergeant scored equally from the mid-wing and along the baseline to pace the visitors. Still the Bears began to claw back into the game. Thomas nailed another three and sophomore Jackson Washer scored his first varsity points to cut into the lead. Senior Dylan Goodall’s shooting touch was hampered by a broken nose, but he managed to make his presence felt on defense, helping on two steals and rooting out two crucial rebounds during the Bear spurt. Despite Apollo being helped along by two 3-shot trips to the free-throw line the Bears outscored the Eagles 16-15 in the period and trailed at the break 31-24.

The Eagles tried to put the Bears away for good early in the third period. Shelton scored 8 of his game-high 24 points in the opening minutes of the third period and the Eagles opened up a 44-27 bulge before Coach Woodcock called a timeout to calm his team. The timeout worked for the Bears. Following the stop Trevor Jenkins began to find ways to score around the paint, and Elijah Flener hit another three to cut the Apollo lead back to 46-38. Both teams entered into a frantic pace that saw rapid scoring on each end of the floor. When the dust settled from the period the teams had combined to score 39 points, and the Eagles continued to lead 51-43.

At several points in the fourth quarter the Eagles got big baskets to extend their lead and threaten to put the game out of reach. However the Bears responded each time and managed to trim the Apollo lead to four on three different occasions in the fourth quarter. With less than two minutes remaining the Bears had the ball and trailed by only four points, but twice were unable to convert scoring chances. When the Bears did score they were matched by the guard tandem of Sergeant and Shelton. In the end the slow first period doomed the Bears and they couldn’t overcome the early deficit. The final in an entertaining game was Apollo 68, Bears 60.

The Bears will be back in action twice over the weekend. The Bears will open district play on Friday night with a boy/girl doubleheader at Grayson County, and will host Russellville at home on Saturday night. Both games will be broadcast live on WLBQ AM 1570 and will be streamed live on the internet at Beechtreenews.com