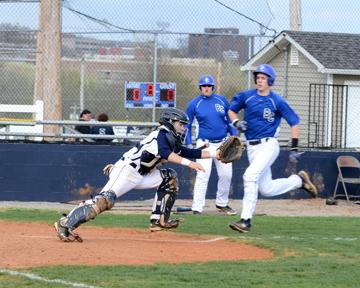 Friday evening was a big night for the BCHS baseball team as they traveled to Warren Central to play the Dragons in a varsity doubleheader.  The Bears pulled out victorious in the first game with a victory of 5-3, and were defeated by the dragons in second game 11-4.  The victory over Warren Central was the first time BCHS has beat the Dragons since 2005, and the first victory over a high school from Warren County since 2007.  The win brought BCHS up to 7 on the year, already matching the win total from 2012.

BCHS came out swinging in the first game against Warren central and recorded 8 hits over seven innings of play.  Clark Parker and his brother Trevor Parker broke the game open with their back-to-back doubles to left field.  Trevor Parker was able to drive in two runs off of his double.  Brandon Jones and Clark parker had multiple hits on the day, each collecting two.  Senior right handed hitting second baseman Carrington Harpe continued to stay hot at the plate picking up a single and driving in a run.  Caleb Hunt, once again, pitched extremely well for the Bears.  Hunt was the starting pitcher and threw 6 innings on the mound.  He struck out 5 and only walked 2 batters in his outing.  His 5 strikeouts move him up to 52 on the year.  After Hunt got into trouble, 8th grader Blake Graham came in the 7th inning to get the save.  After having the bases loaded with Dragons with no outs, Graham was able to strikeout a Dragon hitter.  With one out and the bases still loaded, the Central batter grounded the ball back to Graham who started a successful 1-2-3 double play to end the game.

BCHS head coach Kevin Winn was excited with how the Bears played in game one: “The thing I was most proud of today is that we were able to find a way to win.  Even when things got tough in the last inning, we were able to work ourselves out of it.  That is what good teams do.”

Game two did not go quite as smoothly as the first game for Butler County.  8th grade pitcher Ty Burden made his second start on the year for the Bears on the mound.  Burden allowed 3 earned runs to score over his 2 2/3 innings of work.  After Burden, the Bears brought in three other pitchers pitch the final 2 1/3 innings of the 5 inning game.  Over the final two innings of play, BCHS pitchers allowed for 7 runs to cross the plate.  Clark Parker was able to drive another double offensively for the Bears; however, their 4 runs off of 5 hits just was not enough.