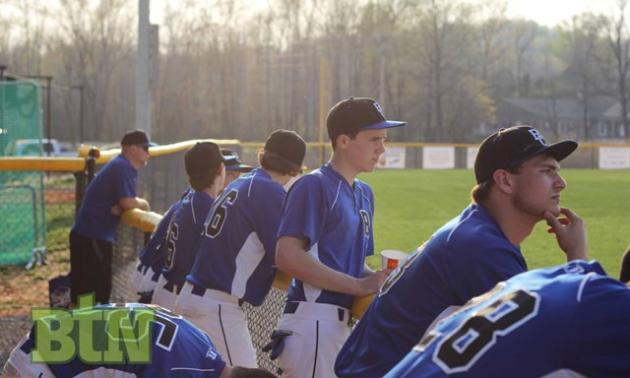 Despite it being spring break, the BCHS Bears baseball team stayed busy over the week.  The Bears dropped a 10-0 contest at Allen County-Scottsville on Monday, and lost a close one 5-4 against Russellville on Tuesday night.  Rain canceled the game against Metcalfe County that was scheduled for Thursday.  The Bears JV also played once over the week, losing 3-0 against Russellville.

Steven White had the start on the mound against Allen County Scottsville on Monday.  The Patriots (7-3) had a hard time getting their offense started early on against White.  Eventually, the Patriot bats came alive and a homerun in the bottom of the fourth inning gave them the 7-0 advantage.  White was replaced on the mound by Caleb Deweese.  Allen County then went on to score 3 more runs, making the score 10-0 going into the top of the 5th inning.  The Bears were unable to answer in the top of the 5th with the first three batters of the inning being retired.  After the three quick outs, the game was called due to the mercy rule.  BCHS only posted 3 hits on the day with singles hit by Carrington Harpe, Caleb Hunt, and Steven White.

Tuesday saw the Bears and The Panthers of Russellville battling out a close match.  Senior Dillen White started the game pitching for the Bears and was able to last 6 full innings.  White struck out 3 batters, gave up 9 hits, walked 3 batters, and allowed 3 earned runs to cross the plate.  The BCHS offense was once again silent for most of the game, not scoring any runs in the first 6 innings.  In the top of the 7th inning the Bears began to make a charge.  They were able to score 4 runs in the first two outs of the 7th inning.  With two outs and the bases loaded, senior Steven White had a chance to drive in the tying and go-ahead runs.  White was able to square up a line drive that was caught by the centerfielder, giving the Panthers the 5-4 victory.

After the game, Head Coach Kevin Winn said, “This team doesn’t quit.  We put ourselves in a position to win tonight.  Steven White hit the ball extremely well in the last at-bat of the game, but unfortunately it was right at them.  I was very proud of the way we fought.”

The Bears had 6 hits on the day.  Junior Carrington Harpe was a perfect 2-2 on the day at the plate with 2 walks and 1 RBI.

The BCHS JV took on the Panthers of Russelville High School after the Varisty game wrapped up.  The JV Bears lost 3-0 and fell to 1-3 on the season.  Freshman Brand Jones and 7th grader Blake Graham both pitched in the loss.

Thursday’s scheduled game against Metcalfe County was canceled due to inclement weather.  The game will be rescheduled for a later date.

The Bears will be back in action on Monday as they travel to Franklin-Simpson to play the Wildcats.  They will then come home to host Henderson County on Tuesday at 6:00.  The rest of the week will be used to prepare for the Bowling Green Invitational Tournament that begins on Friday at Greenwood High School.