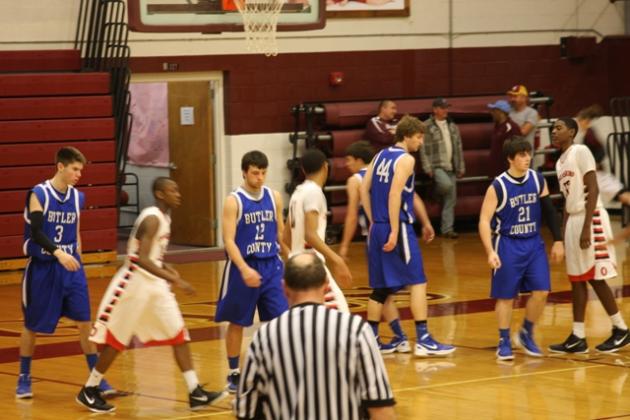 Christmastime means a heaping helping of high school basketball to go along with all the dinners, presents, and parties. The tradition of holiday hoops has kept the teams from BCHS busy this week on day-trips to play in a pair of holiday showcase events.

On Tuesday morning the Bears traveled to Calhoun, KY to take on the Owensboro High School Red Devils in the Advanced Drainage Systems Round Ball Roundup at McLean County High School.

After games last week in Carrolton, KY the Bears were closer to home, but still facing up against a tough but underachieving Owensboro squad. The Devils entered the game with a 4-5 record, with the Bears coming in at 4-7.

Early on the Red Devils were able to control the pace and set the tone for the game. With a split squad of 3rd and 4th region officials calling a loose game as far as personal fouls the Devils were able to use their speed to sprint ahead to a 18-11 lead after the first quarter. Butler County had only two players in the scoring book in the first period with Jackson Washer putting in 8 and Trevor Jenkins hitting a three-pointer. Owensboro was paced in the period by their freshman shooting guard Dylan Sandford with 8 in the period, but the Devils got made threes by three other players to push their lead to 7.

The Devils didn’t slow down in the second period, and foul trouble for Jackson Washer limited his minutes, and the defense started to key more on Jenkins slowing his production. Elijah Flener and Zeke Woodcock carried the load for the Bears in the period, but big quarters from Trey Howard, 9 points, and Kahill Hinton, 7 points, helped the Devils post 20 points in the period to take a 38-25 lead at halftime.

Any hope from the Owensboro fans that they would get an easy win went away early in the second half. After adjustments at halftime the Bears offense was able to execute more effectively in the third period, and the hot Owensboro shooters were suddenly cold and unable to find their range over the Bears zone. Two threes from Trevor Jenkins and one from Elijah Flener helped the Bears outscore the Devils 19-12 in the period and as the third quarter closed the Bears had narrowed the lead to 50-44.

Early in the fourth period it looked as if the Devils were rattled, but they settled down and found their scoring range again. Freshman Darion Morrow and junior Trey Howard dashed the Bears’ hopes for a comeback with a combined 13 points in the period, as the Devils outscored the Bears 23-17 in the final period on the way to a 73-61 win.

With their loss moving them out of the winner’s pool the Bears took the floor in McLean County on Wednesday morning to take on the Braves of Union County. The small contingent of fans didn’t realize at the outset that they were about to witness an offensive explosion which would result in 199 total points in the ballgame.

Both teams roared out of the locker room shooting and hitting three pointers. Kren Rister opened the three point barrage on Union’s first possession, with Butler County’s three point specialist Trevor Jenkins immediately answering for the Bears. The pair of made threes were the opening shots in a salvo of shooting that would leave both teams winded at the end of the quarter, with Butler County leading 26-23. Combined the two squads made 8 three pointers in the quarter with Trevor Jenkins knocking down three for the Bears.

In the second quarter Duncan McCormick as able to find seams in the BCHS zone on his way to several easy layups. Union’s speed started to give them an edge over the Bears and led to 10 layups. From long range both teams continued to hit. The Braves’ Rister hit three long threes in the period and despite 23 first-half points for Jenkins the Bears were down 60-53 at halftime after being outscored 37-27 in the second quarter.

Combined the teams hit 15 out of 21 three pointers in the first half.

Compared to the first half the second half started off slowly. Both teams traded short jumpers and layups for a few moments before Rister and Jenkins rejoined their outside shooting duel. Each shooter hit a pair of threes in the period, but the scoring slowed noticeably as the Braves outscored the Bears 18-15 to take a 78-68 lead.

BCHS was down but certainly not out as the fourth period opened. Momentum had shifted decidedly in the favor of the Bears, and the fans on hand for the day’s second game seemed to have gotten behind the trailing Bears. Trevor Jenkins, Dylan Goodall, Zeke Woodcock and Elijah Flener all hit crucial threes, and Jackson Washer and Woodcock had nine points each in the period for BCHS. The Bears cut the lead to 4 points on two occasions, but both times were thwarted when they tried to get within a basket.

In the end the Union County Braves quickness won the day. Run outs and layups were too much for the Bears to overcome and after a hard fought game BCHS fell to the Braves by a final score of 102-97.

Early on there was talk among game officials and some coaches that the game could have set or tied some state records, but a check of the official KHSAA record books proved that not to be the case. 199 total points doesn’t even put the game on the list of the state’s highest scoring games. Boyd County topped Blaine HS by a final of 170-87 in 1953 in a game which set the highest combined score at 257. In the three-point era, 1988-present, the highest combined score was set by Jackson City and Millersburg Military Academy in 1992. The teams combined for 252 points in a 180-72 Jackson City win. The 39 combined three-point attempts is far short of the record of 101 combined attempts in the 1992 Jackson City/Millersburg Military game. That game also featured the most combined made threes in a game at 41. BCHS and Union County Combined to hit 22 threes in the game, knocking down 11 each. Trevor Jenkins led the way with made threes in the Union County game, knocking down 8.

The Bears will play on Thursday morning at 11 on the third day of the Advanced Drainage Systems Roundball Roundup at McLean County. The Bear will take on a familiar foe when they face one of their 12th District opponents, Whitesville Trinity High School. Coverage of the game will begin on 1570 WLBQ AM at approximately 11:20 with the Beechtree News Pregame show.