Bears, Aces to battle in Morgantown on Friday night 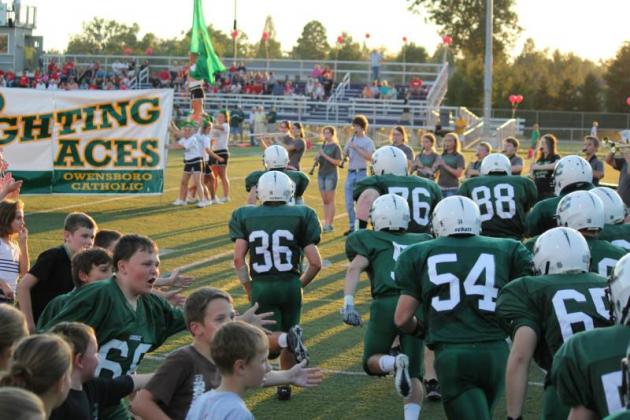 The familiar green and white will arrive in Morgantown on Friday night and that means a prep football match-up between the #1 ranked Owensboro Catholic Aces (4-0) and the 11th ranked Butler County Bears (4-1).  Catholic was idle last week but has notched wins against Apollo (23-12), Daviess County (28-14), Owensboro (20-7), and South Spencer, IN (24-14).  Butler County suffered its first loss of the season last week at Grayson County.

With a team the caliber of Owensboro Catholic coming to town, the Bears have quickly shifted from last week's setback to this week's challenge.

"Catholic is a very well coached team.  John Edge does a great job getting his guys to play quality football at a high level.  They are the #1 ranked team for a reason.  They do very good things on the field and play football based on sound fundamentals," said Emmick.  "They have a great coaching staff that do an excellent job preparing them week in and week out.  While they lost a lot of players to graduation last year, this year's team is still very good and they are undefeated to this point for a reason."

While Friday's game is a district contest, Coach Emmick isn't overplaying the significance of this game in terms of its district ramifications.

"We have a long district season remaining.  We are 1-0 in the district right now but have to focus on our district one game at a time," said Emmick.  "Things will fall where they may at the end, we just have to focus on the job at hand each and every week."

Although Catholic is a solid team, Coach Emmick isn't trying reinvent the wheel when it comes to getting his team prepared.

"Our game plan is the same each and every week.  We have to go out and focus on doing our jobs, taking care of and limiting our mistakes, and playing passionate football," said Emmick.

The Bears have fared pretty well on the injury front this season with just the usual bumps and bruises.

"We have several players banged up and knicked.  Most of them will be game time decisions," added Emmick.

The Bears and Aces are set to kick off at 7 p.m. in Morgantown.  The game will be broadcast live on WLBQ 1570 AM/Beech Tree Radio with the pre-game slated to begin at 6:45.  Veteran football announcer and statistician David Clark will have the call.