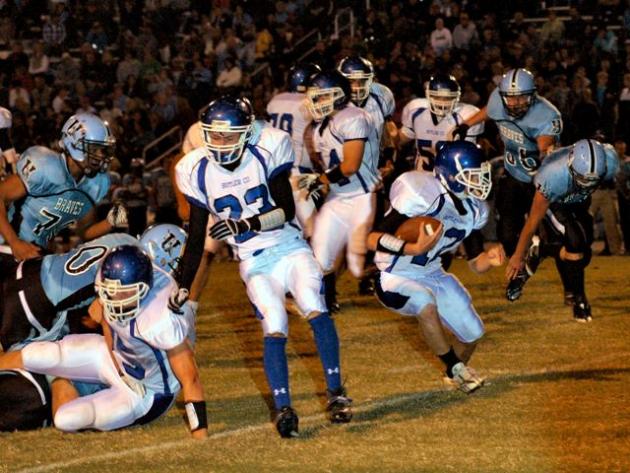 The BCHS Bears improved to (6-1) overall with a key district win over the Union Co. Braves by the score of 33-0, Friday night at Morganfield, Ky.  The Bears most notable part of the game would have to be the defense. Tossing another shutout, the Bears almost seemed angry over the previous week.  Union Co. total offense on the night ended up in the negative category. That’s right, negative yardage; on the night Union Co. had only one first down, and a negative (-12) twelve yards total offense.

The Bears completely took over the game in the trenches, dominating both offensive and defensive lines as the night wore on. The Braves ran the ball (24) twenty-four times for a negative sixteen yards rushing.  Passing was also very difficult, as the Braves QB could only complete one pass on the night; while throwing (2) interceptions. To add insult to injury the Bears special teams got in on the act blocking a Union Co. punt deep in their own territory, resulting in a momentum changing touchdown with only seconds  remaining in the first half.

Quarterback Elijah Flener scored on a busted play to get the first score of the night. Cole Tynes kick gave the Bears a 7-0 lead with 6:57 left in the half.  It appeared that would be the all the scoring for the first half, but a team of Bears blocked a Union Co. punt which rolled into the end zone and was recovered by Flener for the Bears, another Tynes kick good. Bears led 14-0 at the break.

Senior running back Jacob Oliver led the Bears on the night with (91) yards on (16) carries and an eight yard touchdown run making the score 20-0, Tynes kick good 21-0 Bears with 2:45 remaining in the third quarter of play.  The scoring would continue for the Bears, senior running back/ receiver Clay Embry broke free and scampered 42 yards for the touchdown; Tynes kick no good 27-0 your score with 9:46 left in the game.  The final score would come from Senior Cole Tynes on a six yard run, score 33-0 with 4:10 left to play.  The Braves could not account for one first down in the second half of play and your final score reads: Butler Co. 33, Union Co. 0.

The Bears return home for the final home game, this Friday night October 7th. Senior Night activities will be pre-game. Despite the Fall Break and no school, understand that varsity football contracts are written two years in advance.  Kickoff is @ 7pm @ BCHS.

Here is a glimpse at the standings with only three weeks left in regular season play. To secure home field in the first round of the playoffs in November you must finish first or second in your district.